Kings Add To Back End 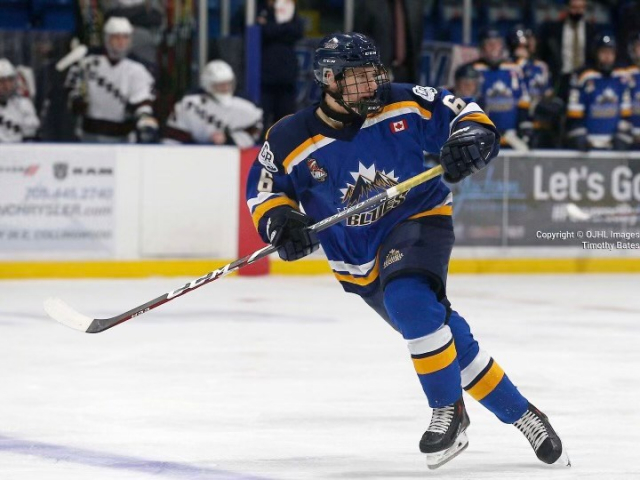 There's no hiding the fact that the Dauphin Kings lost some big pieces on their back end after their run at the Centennial Cup.

Their captain Parker Malchuk alongside assistant captain Colby Jaquet both ran out of junior eligibility. Klim Georgiev who was very solid on the back end also aged out. At the end of the day; however, it happens to all teams. It's then up to the team's general manager to fill the gaps and Doug Hedley has been busy doing just that.

In the Kings' most recent deal, the team acquired Anthony Bax who resides in Parkhill, Ontario. The 18-year-old considers himself a two-way defender that focuses on his own end but likes to contribute offensively wherever he can. Bax says joining a team that just won a championship is a pretty special feeling.

"I was really excited when I found out about the trade, I've heard so many great things about the city and the organization," said Bax. "It's a pretty exciting opportunity and I'm looking forward to earning a spot on the team."

Anthony started last season with the Collingwood Blues of the Ontario Junior Hockey League where he scored once and had four assists in 26 games. He then went to play in the NCDC with the Connecticut Jr. Rangers. He suited up in 11 games with them.

Doug Hedley had this to say on the signing that included Jeriah Shantz heading to Collingwood alongside future considerations.

"He brings mobility, speed and physicality to our back end," offered Hedley. "We are looking forward to working with him. We would also like to thank Jeriah for his time with the Kings and we wish him all the best moving forward."

Bax was drafted 10th overall by the Owen Sound Attack in the 2020 OHL U18 Priority Selection and in his final year of U18 hockey, he scored five times and had 20 assists in the regular season. He also scored one goal and had five assists.