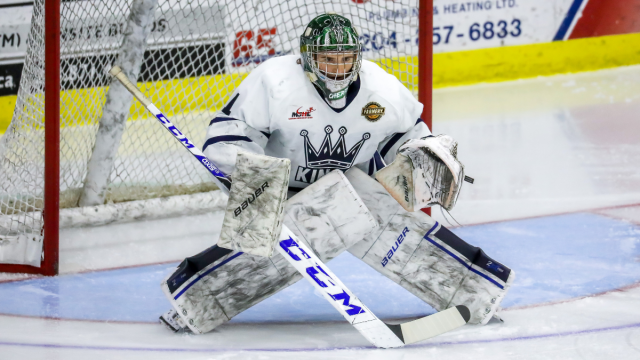 He was the best goalie in the Manitoba Junior Hockey League. His 30 wins were the most in the regular season and that number came despite missing a sizeable amount of time because of injury and sickness.

Moving forward into the MJHL playoffs, he was incredible and made one of the biggest saves in MJHL history late in the third period against the Steinbach Pistons. He was then named the Centennial Cup's top goaltender and most valuable player. For Carson Cherepak, the 2021-2022 season was dominating. He turned away 45 shots in his debut with the team against the Neepawa Titans way back in September. He also posted a league-tying six shutouts in the regular season and he had another one in the playoffs.

Cherepak's season which ran right until the national semifinal will go down as one of the best in recent years across the country. Still, with one year of junior eligibility, Carson has decided that this past season was his final as a junior hockey goalie.

The Winnipeg native and former goaltender of the year with the Winnipeg Wild of the Manitoba AAA U18 Hockey League has announced his commitment to Rensselaer Polytechnic Institute Engineers (RPI). They play out of Troy, New York in the Eastern College Athletic Conference.

"It's a dream come true. For as long as I can remember, this is what I have wanted," said Cherepak. "To accomplish a dream, it's very exciting. I believe it's going to be the perfect fit for me, I can't wait for next year."

The team is coming off an 18-23-3 campaign. They won their first-round playoff series against Dartmouth before coming up short against Harvard in the second round. Their exhibition schedule next season begins October 1 against Colgate. Conference play begins 27 days later on October 28 when they play Union College in a home-and-home.

"It's going to be extremely competitive and that's what I'm most looking forward to," offered Cherepak. "I'm a competitor and I always like pushing myself to the limit and that's exactly what I'm going to have to do."

RPI is getting a special goaltender not only on the ice but off the ice as well. Cherepak was always front and centre during his time in Dauphin when fans wanted to meet him and take a picture. He was also out and about in the community as he took part in a school visit with a few of his teammates and played some dodgeball while doing so.

It will go down as a one-year stop for Carson in Dauphin, but it was a year full of hardware and a year that he won't soon forget, if ever.

"I'm so glad that I had the opportunity to be with the team," said Cherepak. "I made a ton of great friends and they will be my friends for life. It was a special year and I enjoyed every second of it."

Carson is the second King that has committed to Division 1 hockey in the past few years. Grady Hobbs is playing with the Rochester Institute of Technology where he scored seven goals and had seven assists in his rookie season. Hobbs was named the MJHL's most valuable player in the 2019-20 season when he put up 43 goals and 81 points with Dauphin.