The Wallin family from Brandon has been a billet family for the Brandon Wheat Kings for eight years. The past three seasons they welcomed Braden Schneider into their home and they've had the chance to watch their billet son become one of the top defensive players in the league.

They also welcomed Jordan Papirny into their home, a goaltender that helped the Wheat Kings win the WHL back in 2016. Before all of this -- four years in fact prior -- the Wallin's welcomed twin sons into the world as Zander and Sawyer were born 12 years ago.

When Zander was about 18-months-old, he was diagnosed with cerebral palsy. Fast forward about two years and that's when Zander, without aid, took his first steps when he was three and a half. Although it was about nine years ago, Chad Wallin, Zander's father remembers it as if it were just yesterday.

"That night is very vivid, he just took off," said Chad Wallin. "He was kind of stuck in the same position for a long time and you kind of wondered if it was ever going to happen. When it did, he just put one foot in front of the other and he didn't stop for the whole night, he was walking and running from place to place."

Described as a "hockey fanatic" by his dad, Zander has been very interested in hockey for many years and he's always wanted to get on the ice and skate, a goal that was ultimately never reached until late last year.

The 12-year-old was able to achieve his goal of skating when a one-of-a-kind pair of homemade skates were made for him. Built by his dad and with help from the equipment manager for the Brandon Wheat Kings, the skates feature a double blade on the bottom. The skates were wrapped, put under the tree, and the rest is history. He opened them on Christmas Day with a big smile on his face.

"The look on his face when he opened up the box was sheer delight and surprise," said Chad Wallin. "It was such a genuine reaction, you couldn't wipe the smile off of his face. It was such an incredible moment." 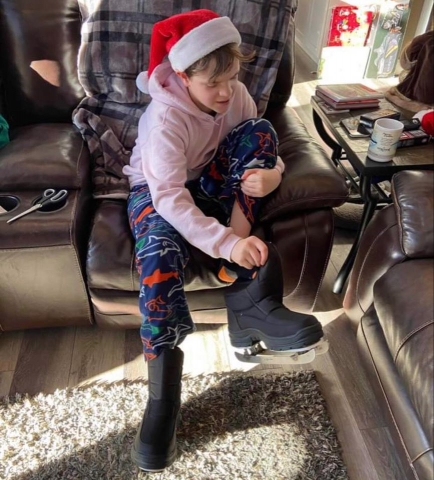 Zander and the rest of the family then went to their backyard where they have built an outdoor rink to give it a try. It didn't go as planned as Zander wasn't quite able to get proper balance and at that point, Chad wasn't sure if it would happen. Just a couple of days later on December 28, Zander wanted to try again and this time, the young man wasn't to be stopped.

He successfully skated for the first time, a goal for him that was years in the making. Chad says it was an emotional moment for the entire family.

"It just took us back to those first moments for everything," said Chad Wallin. "He's wanted to skate for so long and to see him do it, what a sight it was."

The entire family has always loved the World Junior Hockey Championships, but this year was extra special. That's because Braden Schneider was on the team and he was a critical part of the team's back end. Another reason Zander wanted to get on the ice is so he could skate with Braden when he returns to Brandon. There is still no update on when any Wheat King will head to Brandon as the Western Hockey League season is delayed.

Team Canada finished with a silver medal after they were defeated by the United States in Tuesday's gold medal game. 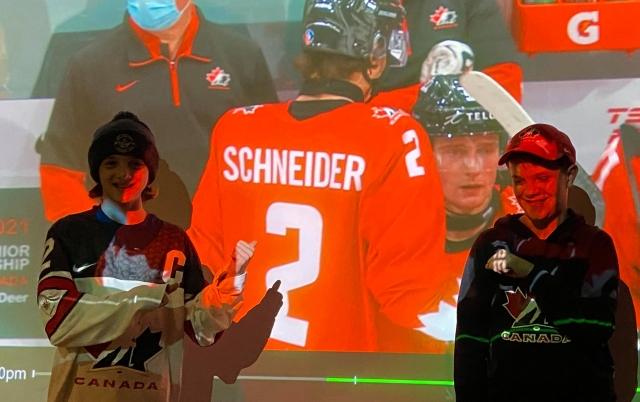 (Zander on the right and Sawyer on the left)