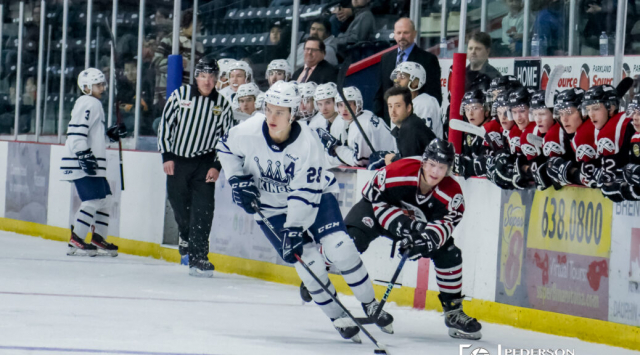 After playing a game, Jayden Harris has trouble falling asleep unless he watches the game back to learn. A true student of the game, Harris is back with the Kings after helping the team win a league title last year.

From going to workouts early to being at the rink extra early before a game to mentally prepare, Harris prides himself on giving his all every second and his work ethic makes him a great leader on and off the ice. That's why this year, Jayden is a part of the team's leadership group and he's very happy to be back in Dauphin.

"It feels awesome to have that voice and lead by example," said Harris. "I love Dauphin, I consider it like home here, especially after what he achieved last year. It feels a lot to me to be back here and playing out my final season as a junior."

Since arriving in Dauphin, Jayden has been doing anything he can to help the team win games. In the past, it's been killing off penalties and playing a stellar defensive game. While he continues to be solid in the defensive zone, Harris has now added an offensive touch to his game. Including last year's Centennial Cup, Harris scored twice and had eight assists in 61 games.

This year, Harris has gone off offensively as he has 15 points, six of which have been goals. Jayden's second on the team in scoring alongside Mason Smith. Harris attributes his offensive success to his work in the off-season and his great linemates this year.

"I worked on my quickness a lot in the off-season so I could beat defenders," said Harris. "I also shot a ton of pucks every day so I could take my shot to the next level. I also have to give a lot of credit to my teammates, I couldn't do what I'm doing without them."

The Kings are back in action this weekend as they play a pair of home games. They welcome Virden to town on Saturday before playing the Winkler Flyers on Sunday afternoon. Dauphin sits in second place in the West Division at 11-7-2 and they're just seven points behind OCN for first, as of publishing. Shortly after Sunday's game, Harris will head to Portage as he is one of 11 Kings' that will play in the MJHL Top Prospects Showcase next Tuesday and Wednesday.

Harris was initially announced as were Owen Wareham and Anthony Bax. Since, Mathew Gough, Cole Sheffield, Jonathon Wong, Aidan Brook, Blake Boudreau, Mason Smith, Alex Senf, and Nick Hatton. It's the first time that the MJHL is hosting this event as Harris and his teammates will get the chance to play in front of scouts at the next level.

"It's always nice to have that recognition from the league and it's great for everyone on our team that is going," said Harris. "If there were more spots, more guys on our team certainly deserved it. I'm super happy about it and I'm looking forward to getting down to business."

Get to know Harris:

Do you have a favourite NHL team? I'm a big Toronto Maple Leafs fan

What's your favourite time of the year? The winter, I love being at the rink and being with the guys, it's what I love to do

What are your goals moving forward? I want to further my hockey career and achieve my educational goals. Playing Division 1 hockey has always been my dream so that's what I'm striving for