Kings To Dubuque: The Jubenvill Story

The Dubuque Fighting Saints will open their new season this weekend at the DICK's Sporting Goods Fall Classic in Pittsburgh. They will play Des Moines on Saturday morning followed by a game against Omaha on Sunday afternoon.

Dubuque is the same team that Riese Gaber played two seasons for. After winning an MJHL title with the Steinbach Pistons, he joined the Fighting Saints in the 2018-19 season and he immediately became an elite point producer, recording 50 points in his first season with the team. Then the Gilbert Plains native took things to the next level the following year as he chalked up 34 goals and 21 assists in the 2019-20 season as one of the team's assistant captains. He was named the league's forward of the year and player of the year after that season. He was also named to the league's first all-star team and his 34 goals were the most in the league that season.

Now Riese is entering his third season with the University of North Dakota Fighting Hawks where he will serve as one of the team's assistant captains. Gaber is coming off a 37-point season and his accolades last year include being named to the National Collegiate Hockey Conference's first all-star team. In the previous season, he was named to the NCHC's all-rookie team, NCHC's all-tournament team, and he was named the conference tournament's most valuable player.

While Riese has been removed from the Fighting Saints organization for a few years now, Dubuque has called on another Gilbert Plains native to shore up their back end. Jayden Jubenvill has been named to the Fighting Saints' 25-man roster ahead of opening weekend in Pittsburgh.

Jubenvill is coming off a tremendous rookie season with the Kings in which he was named to the league's all-rookie team. Playing on a back-end line alongside Colby Jaquet, Jayden was relied upon heavily to lock down their opponent's top players and he never missed a beat transitioning from AAA hockey to the junior ranks. 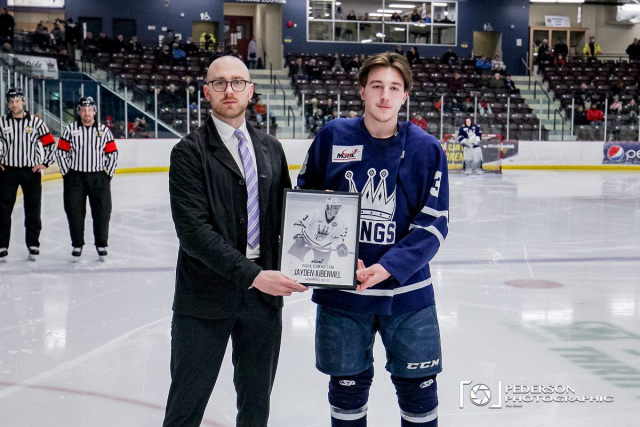 Jayden contributed six goals and 27 assists during the regular season last year and he had four more points in the playoffs as the Kings went on to win the Manitoba Junior Hockey League. They would then advance to the national semifinal where they came up just short. What sets Jubenvill apart is his skating ability and his high hockey IQ.

Doug Hedley coached Jayden last year and he isn't surprised at all that he made the Fighting Saints roster.

"That's what our program is all about, we now have 10 players that moved to the next level," said Hedley. "We're here to put players to the next level and we're very proud of that. I know Jubenvill has a Division 1 scholarship on the horizon, he has some offers on the table."

Following this weekend's Fall Classic, the team will play six straight road games before they play their home opener on Friday, November 4.