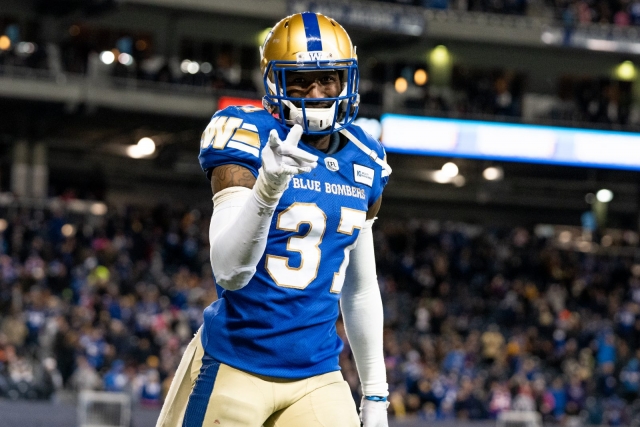 A Grey Cup berth is on the line in just a few days' time as the Winnipeg Blue Bombers host the West Division Final against the Saskatchewan Roughriders.

Saskatchewan advanced to the game after they downed the Calgary Stampeders in a thriller after Rene Paredes missed a game-winning field goal for Calgary.

In their two regular-season contests against Saskatchewan, Winnipeg easily took care of business, outscoring their prairie rivals, 56-17. The forecast for Sunday's game is expected to be around -8 before the wind chill but that isn't bothering the Bombers. Star defensive back Brandon Alexander says whatever the elements are, the team will be ready.

"I don't think anyone on this team is worried about it or even really thinking about it," said Alexander. "We've been practicing in these conditions for a while now and even colder. Whether you're wearing or sleeves, we'll be ready. I just think of it as another game, no worries about the weather."

Alexander recorded 36 tackles for Winnipeg in the regular season and he had two interceptions while also forcing one fumble. The Blue and Gold are looking to defend the title after winning the Grey Cup in 2019 against Hamilton. The team went 11-7 that season, finishing third in the West Division, scoring 508 points while giving up 409.

This year, the Bombers enter the playoffs after an 11-3 season in which they allowed just 188 points against. That's 56 fewer points than Hamilton, who gave up the second-fewest. Winnipeg was a perfect 7-0 on home field at IG Field in the regular season.

"The difference between the two years is the positioning, that's really it," said Alexander. "Our preparation is the same and we know we have to go out there and win a game. We're excited about the challenge and we're happy that we get to play on our home field."

The game will also mark the end of Bob Irving's career. He has decided to hang up his mic after a nearly five-decade career in the booth.