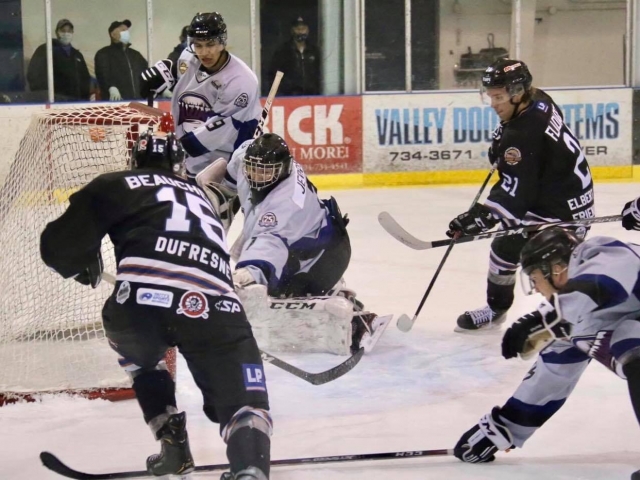 There are just two teams that are perfect through the second weekend of action in the Manitoba Junior Hockey League.

One of them is the Steinbach Pistons who are 3-0 after victories against the Winnipeg Freeze. The Swan Valley Stampeders; meanwhile, are the first team to get to four wins on the campaign.

Opening the season with four straight games against the OCN Blizzard, the Stampeders took care of business as they scored 22 goals while they allowed 13.

Swan Valley also racked up 101 penalty minutes. The Stampeders opened the season with a dominating 6-2 win which was followed by two wins in overtime.

On Saturday, Swan Valley pulled off an incredibly improbable comeback. Down 4-1 with just less than six minutes left, the Stampeders caught fire with four straight power-play goals as they won the game 5-4. Two of the goals came off the stick of Jackson Zloty while Alex Danis scored the winner with 25 seconds left and the goal was his fifth of the season.

"We had our chances early and that kind of deflated us when we weren't scoring," said Barry Wolff, Head Coach, and General Manager. "We were lucky to get those power plays late in the game and we just buckled down and found a way to get it done. It was a great win but we weren't happy with the first 54 minutes of the game."

Mikael Foucher made 115 saves on 124 shots as he played the Stampeders first three games in net. He will carry the majority of the load this season; however, the team does have a very capable backup.

Dylan Black made his first-ever MJHL start on Saturday evening in the 5-4 win. The six-foot-one netminder from Surrey made 32 saves including some big ones down the stretch to keep his team in the game.

"He played well. He's a big body that moves well and he's pretty athletic," offered Black. "He comes into practice every day and works extremely hard. He's pretty fortunate to work with Foucher, he's been a great mentor and they have bonded very well. We're happy with our duo in net."

Offensively, the Stampeders are led by Haydn Delorme. The former Prince George Spruce King was acquired in the off-season via trade and he has certainly not disappointed.

The 20-year-old has one goal and eight assists already and that total is the most in the league -- one ahead of Brayden Foreman -- while fellow Stampeder Alex Danis has seven points.

The five-foot-eleven forward is well on his way to recording a career-high in points in a single season. With the Coquitlam Express back in the 2017-2018 season, he sniped six goals and added eight assists for a 14 point total.

"He's so patient and calm. He has a great hockey IQ and he sees plays before others," said Wolff. "You can't teach experience and he has a ton of it. He brings so much to our locker room and we're very pleased with what he's added to this team."

The Stampeders will begin another full week of practices on Monday afternoon ahead of four straight games against the Waywayseecappo Wolverines.

At 2-2, the Wolverines are in a tie for second in the Northwest Division alongside Dauphin while the Stampeders sit four points ahead. Friday's game is in Waywayseecappo before game two of the four-game set is played on Saturday at the Centennial Arena.

Looking forward, the Kings and Stampeders begin their eight-game regular-season schedule against each other on November 20.