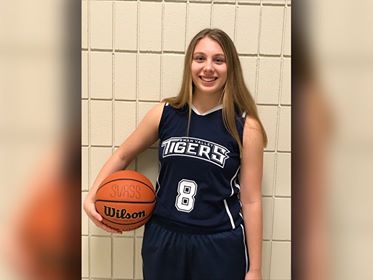 Caitlin Stewart played basketball and soccer at the Swan Valley Regional Secondary School for all four of her high school years. Two of the years were spent with the junior varsity basketball team while the other two were with the varsity team.

Swan Valley welcomes all four grades to play on their high school soccer team. As for all grade 12 student-athletes across the province, those days as a high school athlete are now in the past as she moves on to the next stage of her life.

"I really enjoyed both sports and I loved all of my coaches," said Stewart. "They were super supportive and they always made it extremely fun for us."

This past year in grade 12, Stewart was named a co-captain for the basketball team. It was something that was completely new to her heading into the season and she certainly knew about the responsibilities that come with leading a team not only on the court, but off the court as well.

"That was really special to me, I really enjoyed being a part of the leadership group," added Stewart. "It was an honour to me and it's an experience that I'll never forget."

Dating back three years when Caitlin was in grade 10, she helped the Tigers finish second in the province. Playing in the event featuring the best eight AAA teams in the province, Swan Valley won their first two games.

In their semi-final contest, they took down Pierre-Elliott-Trudeau, a team that was previously undefeated. Stewart helped the team win, 49-47. In the finals, they would come up short against the Lorette Scorpions.

"That was a pretty incredible season. It was a lot of fun and we had a bunch of amazing girls," continued Stewart. "That win against Trudeau was extraordinary. We played so well and we came together. It was just amazing to make the finals in the first place."

For Stewart, her studies in Swan River have officially come to an end; however, they will continue in Ontario. The Swan River native is attending Lakehead University in the fall and she plans on studying Environmental Management and she'll be doing so with some help.

Caitlin is one of 16 student-athletes in the province that were presented with a McDonald's Leadership Award that comes with a prize of $1000.

"It was really exciting when I found out. My coach had texted me and congratulated me, it's a real honour," Stewart said.

Of the 16 recipients, only four of them had a higher academic average than Caitlin as she finished her high school days with a 93% in the classroom. She's an athlete, but she also knows she's a student and she prided herself on excelling at both.

"I had some really encouraging teachers and some of my teammates were in my classes, so it allowed us to work together and get done what needed to be done," concluded Stewart.