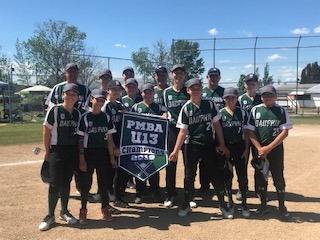 Kids and coaches all around the Parkland have been waiting for the go-ahead from Sport Manitoba and the provincial government when it comes to the starting of the 2020 baseball season and there is finally some good news in the sports world.

The Dauphin Minor Association will officially begin their season on June 15. Jodie Romanow is the President of Dauphin Minor Ball and she's very much welcoming the start of the season.

"It's a great feeling that we finally have the go-ahead," she said. "It was always so unsure, but we officially have the good word and we're really excited about it."

The season will run until July 31. When it comes to games and competition, that is still a big question mark as far as travelling outside of Dauphin. Romanow is waiting for more information from Baseball Manitoba on if they will be able to compete in tournaments and travel outside of the city.

She does say that the earliest any competitions will begin is July 1. If they aren't allowed to travel outside of city limits, intrasquad games will be set up for the entire month of July.

Dauphin Minor does have head coaches for all of their age groups; however, they are currently looking for assistant coaches and if you're interested, you can contact Dauphin Minor on Facebook.

Online registration is now open for the season if you haven't already signed up and it'll remain online until this Sunday, June 7. You can signup to play for the upcoming season at registration.

If you have signed up to play, but your plans have changed for the summer, you have until this Friday, June 5 to request a full refund.

If you do plan on withdrawing your son or child for the season, email This email address is being protected from spambots. You need JavaScript enabled to view it. with the subject line of refund request. You are asked to include the names of all player(s) that will withdraw.

Dauphin Minor is also looking for safety officers at all levels.

"They'll be the keeper of all signage that needs to go up at practices and games," continued Romanow. "They're responsible for cleaning equipment after usage and assuring players are keeping their distance. There is also no spitting or sunflower seeds allowed."

Baseball Canada previously announced that all national championships have also been cancelled for 2020.

There's no doubt that this is unfortunate news, but it's something Dauphin Minor and every other association across the province has to deal with for the upcoming season.

"It's tough when you know you've lost that spirit of competition," concluded Romanow. "Our goal is to provide all kids with an atmosphere that they enjoy. We're going to try to introduce a bit of competition, but we'll see. We're hoping that the kids are just happy to be out and playing the game they enjoy."