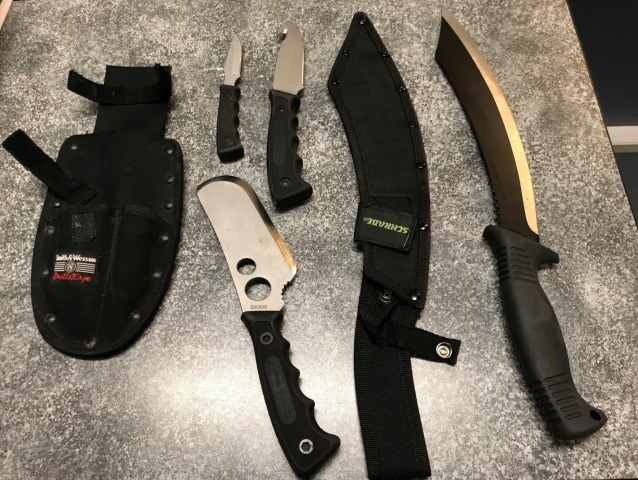 Two men from Portage la Prairie are facing weapons charges after police seized multiple knives from a vehicle on Sunday.

On October 25th at around 1:50 a.m., RCMP received a report of a suspicious vehicle outside of a home on Tupper Street North in Portage.

It was reported that there were two unknown men in the vehicle, and at one point one of the men exited the vehicle and started screaming that he had a gun.

The vehicle then left for a period of time before returning to the home.

At around 2:35 a.m. RCMP located the men, and while speaking to the driver noticed a knife in the vehicle.

Both of the men were arrested and the vehicle was searched. Police seized four knives including a machete, along with a can of bear mace. No firearm was present.

24-year-old Kyle Richard from Portage was under conditions not to possess weapons, and is facing charges including failure to comply with release conditions x6, and breach of probation.

24-year-old Brennen Roulette from Portage is facing charges including possession of a weapon for a purpose dangerous to the public peace and possession of a prohibited weapon.

Richard remains in custody and Roulette has since been released and will appear in court in December.