Eight NCAA Division 1 hockey teams will enter a bubble beginning next weekend as the National Collegiate Hockey Conference begins its play for the 2020-2021 season.

2020 has been like no other year because of the novel coronavirus which means the first part of this season will also be different. Instead of playing in team arenas, all eight teams will instead play in one arena.

Starting December 1, there will be 40 games in just 20 days at Baxter Arena in Omaha, Nebraska. The North Dakota Fighting Hawks will enter the pod as overwhelming favourites to win the conference. After winning the Penrose Cup as NCHC regular-season champions last season, North Dakota is once again atop top of the preseason media poll which was released on Monday.

Riese Gaber has been on the ice for months at his new home south of the border and as the team ramps up its preparation ahead of the new season.

"There's going to be a lot of eyes on us, I think everyone on this team knows that," said Gaber. "With that said we know what we're capable of and we know that we have a special group. We're just excited to get started and show how special we can be."

Gaber joins UND after an all-star season with the United States Hockey Leagues, Dubuque Fighting Saints. The former Dauphin King scored 34 goals last season, the most in the league while he was named the forward of the year and to the league's first all-star team. 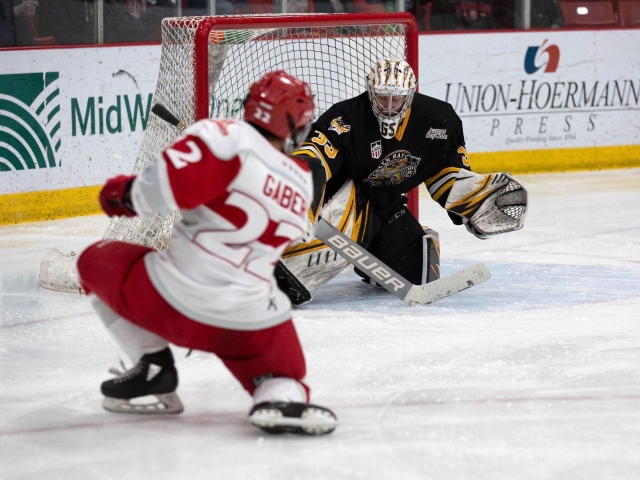 As the Gilbert Plains native continues to work hard ahead of game number one, he is ready for any challenge that comes his way playing in one of the most competitive conferences in Division 1 hockey.

"Things have been going pretty well. I've adjusted quite well, I feel super comfortable here," said Gaber. "We have a lot of top-end players here and it's been great being able to watch them and learn from them."

The Fighting Hawks also enter the season as favourites to win the Frozen Four which is the national championship to be played in early April. Boston College is second-ranked followed by Minnesota Duluth, Michigan, and Denver to round out the top five.

Riese's first game with his new team is set for next Wednesday against Miami. That's followed up with a game against Denver next Friday and Western Michigan next Sunday to wrap up the first week of play in the bubble. You can watch all of Riese's games at Fighting Hawks hockey. The team's final game in the bubble is on Sunday, December 20 against Miami.

Known for his speed and slick hands, Gaber has proven that he can score in bunches, and he's looking forward to helping his new team win games anyway he can.

"I'm going to get an opportunity to play, and it's what I make of that," ended Gaber. "I need to make the most of it and we'll just go from there."

Are you looking for your hockey fix during a time where there is no hockey in Manitoba? Stay tuned as Darnell Duff breaks down all of Riese's action in the Omaha bubble with his new team.