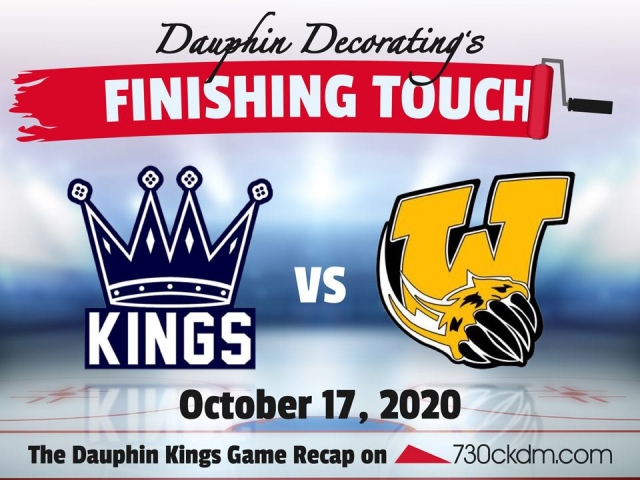 Hats were launched onto the ice and fans were in celebration mode as the Dauphin Kings picked up their second win of the season on Saturday night.

Playing in their second game at Credit Union Place, the Kings would open up a 2-0 lead after 20 minutes and they never looked back as they defeated the Waywayseecappo Wolverines, 5-1. The win comes after the Kings lost on Friday night despite putting up 47 shots -- the most they have recorded this season -- while they recorded another 34 shots on Saturday night.

"You have to like the rebound in our team, that's for sure. After a tough loss on Friday where I think we deserved more, this was big for us," said Head Coach and General Manager, Doug Hedley. "The fact that we can rebound and have an effort as we did on Saturday, it's great. I think we could have had more than five goals but Tereposky played well in net again."

Matthias Smith is 0-2 on Friday nights but there is clearly something about Saturday nights for the young man from British Columbia. In a game where Wayway racked up 42 shots, Smith turned away 41 of them to pick up his second win of the season.

The only skater to beat Smith was Conrad Phillips who scored 27 times last season.

"It was a really good team game. Everyone did what they had to do, everyone played well," offered Smith.

Grady Hobbs scored 43 goals last season, he had two coming into tonight and now he has five after four games. The 20-year-old from Deloraine who is playing in his fifth season with the Kings lit the lamp three times for his first hat-trick of the season and second dating back to the preseason when he scored three times against Neepawa. Hobbs scored Dauphin's first goal, third goal, and fifth goal in the victory.

"Anytime a guy scores that many goals in a previous season, we expect him to do special things offensively," said Hedley. "His effort is always great at practice, he practices how he plays and it's to his benefit."

Dauphin will begin a four-game stretch against OCN at the Gordon Lathlin on Friday night. Darnell Duff has the pregame show at 6:45.