A Look At Wheat Kings Vs ICE 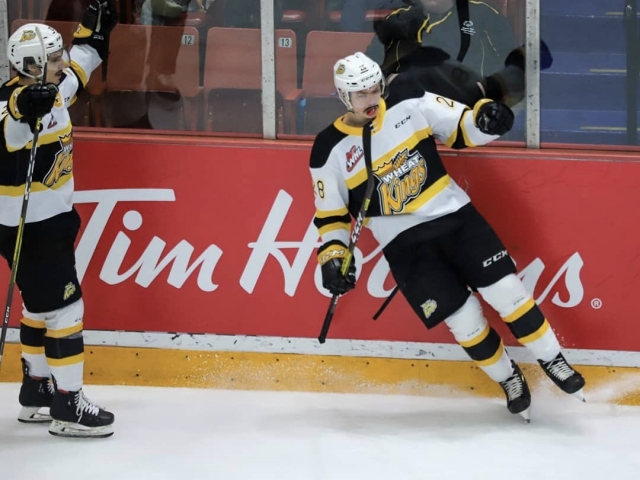 The start of the 2019-2020 Western Hockey League season was an exciting moment for all junior hockey fans across the country. Understandably so — the game so many Canadians love was back — and the talent across the league was in a great place.

On another exciting note, the start of this season welcomed the Winnipeg ICE to the fold as they relocated from Kootenay, one season after a campaign that offered up just 13 wins.

Winnipeg being the newest member of the league would instantly start up the “Battle of Manitoba” between the ICE and the Brandon Wheat Kings, a team that has been in the WHL since 1966. They’ve won three league titles in 1979, 1996, and 2016.

With all of that aside, it was set to get down to business and they split their two pre-season meetings. Things started to really matter in their first regular-season meeting which was set for September 20.

On the shot clock, Winnipeg hammered Brandon, 45-26. The reason the ICE didn’t run away with the game was the play of Jiri Patera who made 42 saves. However, in the end, the ICE did earn two points with a 3-2 win. Michal Teply, Connor McClennon, and Isaac Johnson scored markers for Winnipeg in the game while Zach Wytinck and Vincent Iorio responded for Brandon.

With their first meeting officially in the past, it was time for the provincial battle to invade Wayne Fleming Arena in Winnipeg for the first time, the next night.

The more than 1600 fans were treated to a back-and-forth exciting game, one that saw Brandon get their revenge in a 4-2 win.

74 shots combined were up on the shot clock with Patera getting the upper hand as he made 33 saves.

For the first time in nearly a month-and-a-half, the “Battle of Manitoba” was back at it, this time at Westoba Place in Brandon. Brandon sizzled on the man advantage with three power-play goals and they erupted offensively with seven goals in a 7-2 win as they took a 2-1 series lead.

Brandon really showed off their depth in the game as seven different skaters scored including two defenceman. Braden Schneider led the way with one goal and two assists while Chad Nychuk had a goal and one helper.

Cole Reinhardt, Connor Gutenberg, Ridly Greig, Ty Thorpe, and Jonny Hooker all scored a goal in the game. Jiri Patera garnered another start for Brandon and he wasn’t relatively busy; however, he did make some key saves in the win and overall, he turned away 23 shots.

Owen Pederson and Jackson Leppard both scored two goals for Winnipeg. With that said, offence surely wasn’t the problem; however, Winnipeg’s defence got them into trouble as they allowed another touchdown against their provincial rival.

Cole Reinhardt had three tallies as the Wheat Kings skated off with a 7-4 win. Connor Gutenberg, Ridly Greig, Lynden McCallum, and Marcus Sekundiak scored goals in the game.

The win gave Brandon three wins against Winnipeg compared to the ICE’s one.

Losers of three straight against Brandon, it was Winnipeg’s turn to make a statement and they sure did in the third period and that’s why they earned their second win against the Wheat Kings.

Three third-period goals which started with Nino Kinder’s ninth of the campaign fuelled Winnipeg in a 6-5 win.

Connor McClennon scored three times for Winnipeg, one of which was recorded in the third period. Michal Teply and Jakin Smallwood also lit the twine in the victory. Ethan Kruger did give up six goals, but there was a bright spot in his performance as he made 45 saves. Offensively, Lynden McCallum pocketed two goals.

If this were a playoff series, the ICE would be on the brink of elimination. However, it’s not, but that doesn’t mean two big points weren’t up for grabs as the teams met inside of the Wayne Fleming Arena.

Winnipeg outshot Brandon, 35-23, but they didn’t beat them where it mattered. The Wheat Kings used four goals from four different players in a 4-3 nailbiting win that saw Jiri Patera made 32 saves in the win. Liam Hughes was just 19-of-23 for Winnipeg.

Connor McClennon did continue his solid play against Brandon with two more goals in the defeat. So, the season series was 4-2 for Brandon. This was just the first of three overall meetings in the month of December.

The game kicked off home-and-home with the first game being played in Brandon. This game was all Liam Hughes, though. He made 28 saves to stymy Brandon’s offence in a 4-0 win for the ICE.

Connor McClennon found the back of the net again while Isaac Johnson scored twice and Peyton Krebs potted one goal as well.

Winnipeg’s win brought the season series to 4-3 for Brandon with just one more game remaining in 2019, the very next night.

Owen Pederson scored the game-winner just 4:21 into the third period as Winnipeg eventually skated off with a 3-2 win to complete a weekend sweep and split the season series at four.