The Dauphin Kings won two of three last week and seem to be moving in the right direction coming into action this week where they’ll play two games in two nights.

The Kings beat the Wayway Wolverines 4-1 and Winnipeg Blues 2-1 in OT last week, sandwiched in between those results was a 4-1 loss to the Winkler Flyers. Dauphin’s defensive game seems to be on the rise as well. They’ve allowed seven goals in their last four games which is a 1.75 goals against average. If you take out the loss to Winkler the Kings gave up just three goals in that span. Another positive moving forward.

Dauphin is currently eighth in the MJHL Standings, but have games in hand on almost every team in the league.

This week, as mentioned, the Kings will play two games in two nights and both of them are against the OCN Blizzard. On Friday the Kings are home to the northern Manitoba club, opening face off is 7:00pm. Listen to the One Hour Power Play Show that afternoon on 730 CKDM, it goes from 4:00pm to 5:00pm. Then on Saturday Dauphin goes north to OCN to skate with the Blizzard. Puck drop is also 7:00pm. Saturday’s contest can be heard on 730 CKDM, the Parkland Source for Sports Pre Game Show begins at 6:45pm.

Three ★‘s Of The Week

Graeme Hore continues to play well as the season marches on for the Dauphin Kings. Hore scored a fun goal on Tuesday night when the Kings beat the Waywayseecappo Wolverines at Credit Union Place. The tally was the former Southwest Cougar’s first since his second game of the season. Hore may have only had one point last week but he continues to play well on one of Dauphin’s grind lines. 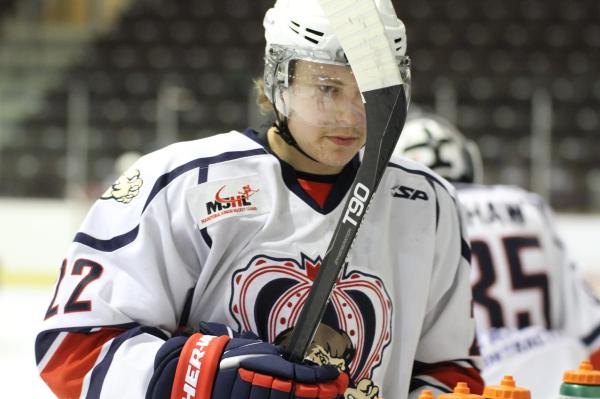 Unfortunately the Dauphin Kings will be without the services of local forward Tyler Derkach for a little bit of time as the 18 year old forward has re-aggravated an upper body injury suffered earlier in the season. Derkach was coming off arguably his best two games as a Dauphin King. On Tuesday he grabbed an assist (First MJHL point) in Dauphin’s 4-1 victory over Waywayseecappo, he then scored his first goal in the MJHL on Friday in Winkler. The timetable for Derkach’s return to the Kings lineup is currently unknown.

The Dauphin Kings’ Captain had a goal and an assist last week for his club and continues to lead the team with his play on the ice. The hard work was on full display in overtime on Sunday night when the Kings edged the Winnipeg Blues 2-1. Garrioch was late in a shift but used his remaining energy to generate a quality scoring chance and then finish on it. The Winnipeg product is currently on a two game point streak (1G, 1A) and has points in five of his last six games.