The Grand Plains Atom Ice Dogs put a solid weekend together en route to winning the B-Side final at the Hamiota tournament.

After playing to a tie against Hamiota in their first game, the Ice Dogs dominated Reston big time to finish off the round-robin perfectly.

The Ice Dogs got right back on track in the B-side finals by beating Weyburn, 7-2.

Dauphin’s Todoruk & Team Win It All!

Dauphin’s Greg Todoruk and his foursome are Champions!

The win was a double up for the foursome. They also won the PSLOC last year.

“It feels great to win this,” said Todoruk. "It‘s even more special because it’s the second year in a row. We are only the second team to ever do that.”

Zach Grouette was tremendous in net and the Parkland Rangers are coming home with a point because of it after a 2-1 defeat in overtime against Pembina Valley.

After a solid performance yesterday, Parkland quickly got on the board today as Landyn Brasch scored just 1:03 in.

Pembina Valley quickly responded as they scored at the 2:42 mark.

Grouette stole the show after that. He turned away 46 shots through the rest of regulation as the game was overtime bound.

In the extra five, Pembina scored on their fifth shot to earn the extra point.

The Rangers welcome Southwest and Eastman to town next weekend.

It was a tremendous start for the Dauphin Kings, but they struggled in the third and fell 4-1 to the Portage Terriers on Ukrainian Night tonight.

Just 1:26 into the game, Cole DeKoninck opened the scoring for Dauphin as they went up 1-0.

Ethan Slobodzian and the Kings’ defence teamed up to shut the door down for the first 40 minutes.

In the third, the Terriers’ busted out and scored four straight goals to pick up the two points.

Despite the loss, it was an incredible night at the rink and the community made it a night to remember.

Dauphin returns to the ice on Wednesday as they welcome Swan Valley to Credit Union Place.

Stay tuned for a full recap of Ukrainian Night on Monday as Ryan Rauliuk will join.

Played a solid game against the Pembina Valley Hawks but came up just short, 3-1.

After the Hawks went up 2-0, Taron Topham scored on the power play for Parkland.

PV would score a late insurance marker to earn the two points.

The teams rematch on Sunday.

Dauphin’s Lisa Hale, Stacy Sime and their team wrapped up their tournament with a defeat against the Ackland rink.

Captain Riley Hammond scored twice and you can now make it 17 straight wins for the Dauphin Clippers as they beat the Boissevain Broncos, 6-3 this afternoon.

The Broncos' gave the Clippers everything they could handle as the game was tied at three. Until Dauphin's scoring touch really set in as they scored three straight.

Logan Storey continued his great season with another goal while Austin Storey also potted one.

Brayden Broome and Craig Allard each added one in the win.

The Parkland Bantam Rangers kicked off a weekend home stand with a tight 5-3 loss to the Winnipeg Warriors.

The Warriors scored first in the game, but Brayden Dube tied up the contest with 1:03 left in the first with his 11th of the season as the teams went into the locker room tied at one.

After scoring at 9:46 of the second, Kyan Grouette continued his stellar season by scoring his 10th goal and 36th point.

The game was tied after 40.

Back fired the Rangers, though. On the power play at the 13:16 mark, Jayce Legaarden scored his ninth of the season to tie it up.

Winnipeg scored the game-winner not long after, and held off a late Rangers push to earn two points. Winnipeg’s last goal was an empty-netter.

You’ve been waiting and it’s finally here, Ukrainian night and it goes down tonight at Credit Union Place.

On top of all the activities and borscht, the Kings will be looking to complete a home and home sweep against the best team in the league, the Terriers and they’ll be looking to win their 5th in a row.

The Kings are now just five points behind Virden and Selkirk for a top four playoff spot. 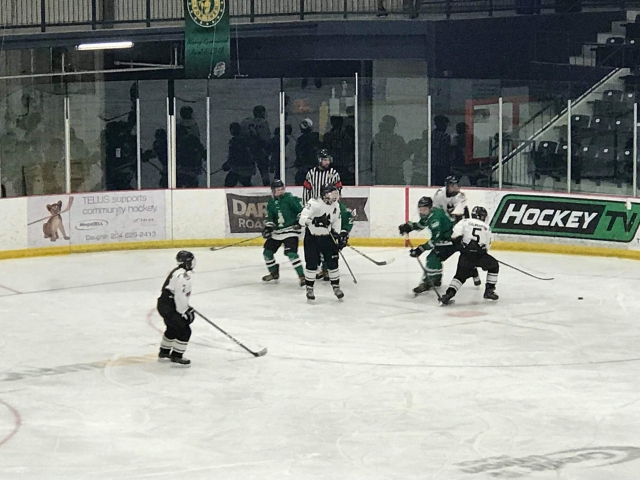 Bode Childs turned away every shot he faced and the Dauphin Clippers won their 16th straight Westman High School Hockey League game as they beat the R.E.M.P Renegades, 4-0 on Friday night.

Dauphin returns to Credit Union Place on Saturday afternoon at 3:00 p.m. against Boissevain.

They played one of their best games of the season but ended up falling 4-1 to Miniota-Elkhorn at the GACC tonight.

Grandview finishes their regular season on February 9 in Rivers.

Kings' Beat The Best In The MJHL

With just under 10 minutes left, Dauphin's Andrew Liwiski fired a seeing eye shot from the point that beat Moore glove side as the Kings' took a 2-0 lead.

It didn't last long though, as Ty Barnstable scored Portage's first goal of the game at the 15:17 mark.

Dauphin overall played a solid road period and led 2-1 after 20.

Joey Moffat would tie the game up 13:12 into the second as he fired a shot past Landsberger's glove.

Portage would take their first lead of the game with just 48.5 seconds left in the second.

Dauphin responded very quickly. Grady Hobbs was cross checked down just inside the Terriers' blue line but somehow he passed it back to Fobair who then had a sick toe drag and potted home a shot with just 4.5 seconds left.

In the third, the Kings' picked up a loose puck in their own zone and Riley Buller and Fobair went on a 2 on 1.

Leading the rush, Buller kept and fired a laser that beat Moore as Dauphin went up 4-3.

Landsberger followed that Kings' goal with some massive saves to lock up the two points. With the win, the Kings' are now 23-19-2-2 and have 50 points.

Ethan Slobodzian grew up in Hamilton, Ontario where the population is well over 500,000. He started his junior hockey career by playing 20 games in the Greater Ontario Junior Hockey League.

In the 2017-18 season, Ethan made the move to northern Alberta where he played with the AJHL's Grande Prairie Storm and the population there is just over 60,000.

Now, the 19-year-old has found himself as a part of the Dauphin Kings in the City of Sunshine, where the population is about 8500. So, Slobodzian's lived in big, smaller, and much smaller but his stop in Dauphin and time with the Kings' so far could be his best yet.

Ethan's now played 11 games with Dauphin and he has a 4-4-1 record with a .901 save percentage and a 3.09 goals against average. Last year, Slobodzian was a game changer with the Storm. He's a huge reason why the fourth-ranked in the North division Storm got past the first round as he made 24 saves on 25 shots in the deciding fifth game.

He's also been a game changer during his time with the Kings' already in net, but perhaps no more so than Wednesday's game. Playing against the OCN Blizzard at Credit Union Place, Slobodzian turned away all 26 shots he faced. It was his first shutout with the Dauphin Kings' and was his first ever Jr. A shutout as well.

"It was definitely huge for me. It's kind of been a burden on my back, I've been playing junior for three years so it's always been in the back of my mind," said Slobodzian. "It was really nice to get it out of the way and it was great that it came here with Dauphin."

The Kings' next challenge comes tonight and what a challenge it will be as the team takes on the first place Portage Terriers at Stride Place. Dauphin is 0-3 against Portage this season. Slobodzian did play very well against them at the MJHL Showcase when he made 31 saves in a tight 4-3 loss.

Tomorrow night, the home and home will conclude as the Kings' welcome Portage to town for Ukrainian Night. This will be Ethan's first opportunity to play in the game that should go down as one of the best nights of 2019.

"I am so excited for tomorrow. It was one of the selling points for me coming here," said Slobodzian. "I saw some of the videos and it just looks incredible. I can't wait to be a part of it."

Another first for Ethan was last weekend as the Dauphin Kings' hosted Comedy Night at the 11th Avenue Hall. That provided Slobodzian with one of his first real chances to get out in the community and meet some new people.

"Yeah, that was a really great night," he added. "I really wanted to get out into the community behind the scenes and not at the rink. I wanted to meet some of the people that support the team. It was a great night."

Do you want to hear my full chat with Ethan? You can do so by listening into the Dauphin Kings Power Play show just after the 4:00 p.m. news, weather, and sports.

Dauphin’s Lauryn Kuzyk and the rest of the Manitoba women showed how good this province is at curling for the past week at the New Holland Junior Canadian Championships.

Unfortunately for the team, they will not advance to the semifinals.

They dropped both of their games today against Alberta and Nova Scotia.

After falling this morning to Alberta, the Manitoba squad was still alive if they won out. They ended up giving up a single in 10 against Nova Scotia to drop the game 7-6.

The ladies will play one more game tomorrow morning against Northern Ontario.

They lost this morning to Kerri Einarson. This evening, they dropped their game against the Flaxey foursome.