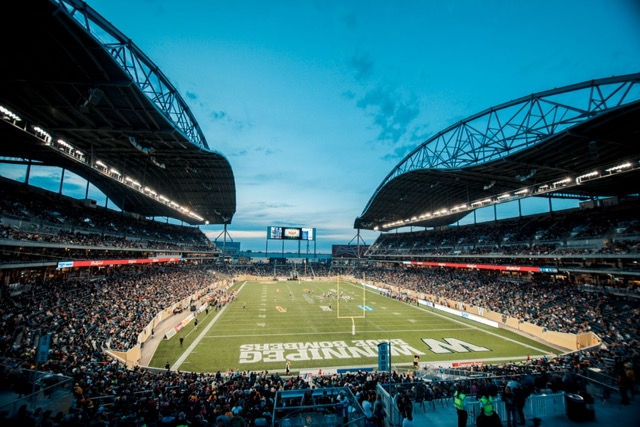 The Winnipeg Blue Bombers are finalizing their preparations for tonight's game against the Montreal Alouettes.

The key to being a successful team is playing 60 minutes of good football on a consistent basis.

Although the Winnipeg Blue Bombers have two wins to their credit, only the one against Toronto made fans think that this could be a good football team for a full football game.

When you look at the Winnipeg Blue Bombers, you see a team that has scored at least 33 points in three of four games so far, and 40+ in two of those, but overall they are eighth in the league in net offence and seventh in passing yards.

If you ask how that does add up, the Bombers usually find a way to put up a lot of points in a small period of time, but they also will usually start slow or finish even slower.

Then in last week’s game against BC, they scored just seven points in the first quarter and none in the fourth. Add up all the quarters that the Bombers haven’t scored in, and you will see why they are eighth in net offence and seventh in passing yards.

Outside of the negatives this season, and blown leads, the Winnipeg Blue Bombers to some still have a good team. Darvin Adams broke out last week with a very good game, and although Andrew Harris hasn’t done a whole lot on the ground game, he racked up 85 yards on 12 receptions last week.

Matt Nichols will also have a tough task tonight, as the Alouettes defence has allowed the fewest points per game this season in the CFL (21.3).

The Bombers will also be without Moe Leggett for the second straight week. Brandon Alexander will continue to fill in, and Brian Walker will take Alexander's usual spot at cornerback.

Five games into their season, the Alouettes numbers defensively speak for themselves, but their most impressive performance came in a 30-23 win over the Stampeders.

In their three losses so far this season, the Al’s plus minus sits at just minus 16, with their biggest loss coming against the BC Lions when they lost 23-16.

Darian Durant has been okay for the Al’s this season, throwing for six touchdowns, but also throwing six interceptions, but it’s his running that has impressed most. Granted he chooses to run sporadically, he’s rushed 12 times so far this season and is averaging 5.8 yards per carry. Not bad for a guy who is getting older, and was picked up by the Al’s in January for not much.

Realistically, something has to change. Can the Bombers crack the stingy defence that the Al’s possess? If they can, the Bombers should win this football game, but if they can’t crack their defence, well then the Bombers could be in for a long day because if prior defensive outings for the Bombers this season say anything, they will need to score lots tonight if they want to win.

Last year, the Al’s and Blue and Gold split their season series, but this year the West is 9-2 against the East. Will that continue tonight?

If you’re not in Winnipeg for the game, or even if you are, tune into 730CKDM tonight at 7:30 for kickoff, as we are a proud member of the Blue Bombers Radio Network.