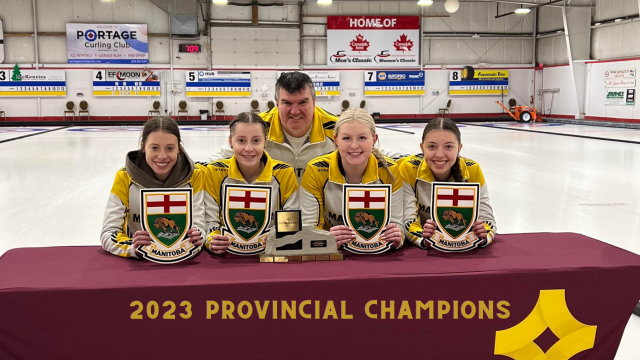 The Terrick sisters have come together on the ice this season and they have taken Manitoba by storm.

Tessa is joined by her sister Zoey and Tessa and making up the foursome is Jensen Letham. The team was just formed this year and they had an extremely successful season on the Manitoba Junior Curling Tour circuit which included them winning the Tour Championship.

That event prepared the foursome for the Telus Junior Women's Provincial Championships which was played in Portage late last week. It truly is a family affair and Jaycee Terrick has enjoyed every second of it.

"It has been a ton of fun, we all understand and get each other," said Jaycee. "I'm having a great time, it's special sharing the same ice with my sisters."

The foursome opened up the provincials by scoring 25 points in their first three games as they started with three straight wins. Playing in the 1v2 page playoff game, Team Terrick came up just short against Team Beaudry which put them into the tournament's semi-final. Team Terrick took care of business in that game as they opened up a 5-0 lead after five ends.

Then in the championship final, Team Terrick scored three in the ninth end and they scored a single in the 11th end to secure the win as the team is now provincial champions.

"It feels so great, I still honestly don't even believe it," said Jaycee. "I am still watching the game today. I quickly went down the ice and hugged my sisters and Jensen, it was such a surreal moment, I can't describe it."

With Cassidy Dundas as the team's fifth, the team has now booked a business trip to Quebec for the 2023 New Holland Canadian Junior Women's championships from March 25 to April 2.

"We'll continue to practice here for the next couple of months and we will try to find some bonspiel action to stay sharp," ended Jaycee. "We're looking forward to playing the best teams in Canada, it's going to be an amazing experience."