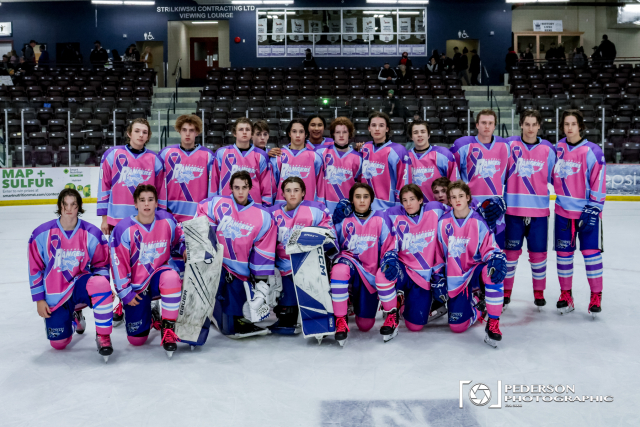 It wasn't the result they were looking for on the ice, but it was still an extremely special night.

The Parkland U18 Rangers hosted their 'Hockey Fights Cancer' night earlier this year and it was a great success says, Jason Gibbs.

"We played Brandon so that brought in a lot of fans," Gibbs. "We had many great prizes and I want to say thank you to Dave Swanton and the parents for putting it together, it was a tremendous success."

In the end, the team raised $3600 and the money raised will be going towards local Parkland Cancer wards.

The team is now putting their focus on their two games this weekend, both of which come against the Southwest Cougars.

"I also want to thank Bill Nicholson from Embroidery by Design for the jerseys," ended Gibbs. "We will be back next year."

Next up for Parkland is a home and home with the Southwest Cougars this weekend. Friday's game is set for 7:30 at Credit Union Place. Friday's game is also Parkland's final home game of 2022. They close things out with five straight games on the road.

The Rangers are seven points back of the final playoff spot. Madden Murray has paced the team with 22 points, 13 of which are goals. Chase Glover; meanwhile, has racked up four wins in net.