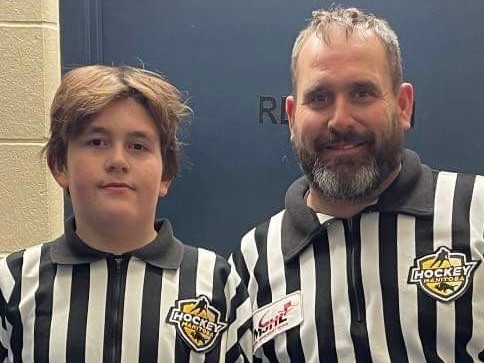 Dave Height started officiating in 1986. For the last 35+ years, Height has been an official for minor hockey games to the junior level and everything in between.

Back this year for his 37th year as an official, Dave is now joined by his son, Jordan. He's decided to put on the stripes and he has now officiated two Dauphin Minor games this season and he doesn't plan on stopping anytime soon.

"I was glad that he decided to follow in my footsteps, that means a lot to me," said Height.

While he has only done two games, Jordan's second game will be a game that he won't ever forget. That's because Jordan and Dave joined forces to officiate a U11 game. It was a game that was filled with many emotions and it was a special night for the father and son.

"It was a proud dad moment to be able to share the same ice with my son," said Height. "I'm excited to have the opportunity to watch him blossom into a good young official."

Jordan; meanwhile, who is already a provincial champion on the pebbled ice said it was a fun night with his dad.

"It felt great, I learned a lot of stuff from my dad," ended Jordan.

Although they aren't scheduled to officiate another game together at this time, Jordan and Dave both said they're very excited for when they get on the ice together again.