Will Munro tallied 25 regular season goals last year in 43 games with the Parkland U18 Rangers. His 45 points were the fourth most on the team and then he scored four more times in helping the Rangers advance to the second round of the playoffs for the first time in more than 20 years.

Munro also played a game with his hometown Swan Valley Stampeders. Now, Will is in Kelowna for his first season in the Western Hockey League and he's suited up in 12 games so far. Growing up spending many nights at Westoba Place to watch the Brandon Wheat Kings play, the Swan River native always had a goal of making it to the WHL and now that he has, the 17-year-old is living out his childhood dream.

"Things have been going pretty well so far, I'm just trying to get used to the pace," said Munro. "Guys are bigger, better and stronger out here, so there's a learning curve, but I feel I'm doing quite well, and I think I'm fitting in well."

While Will works himself into the consistent player he's looking to become at the WHL level, it didn't take him long to pot his first goal as a Rocket. In his 12th game over the weekend against the Moose Jaw Warriors, Will picked off a puck in Moose Jaw's end and fired a beautiful snapshot past Jackson Unger.

Although Kelowna came up short in the game, the goal was a moment that Will won't forget.

"It lifted a lot of stress off me, I haven't scored for a while," said Munro. "It was the monkey off my back and finally lifting it, it felt like getting 20 pounds off my back. It was a great feeling, I was happy to finally get my first." 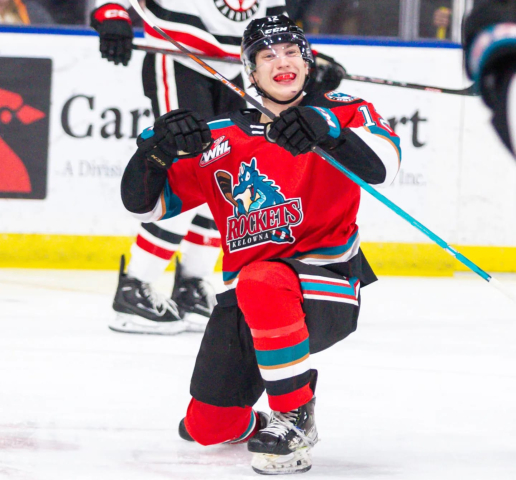 A smooth skater with a great shot, Munro has all the tools to become an all-star at the Western Hockey League level and he will look to do so on one of the most storied teams in WHL history. The team is off to somewhat of a slow start this year at 9-10-1; however, they have won six of their last 10 games.

Will is also another player that excelled with the Parkland Rangers program that has now made the next level. Combining his years with the U15 program, Munro played four seasons with the program, one of which was the COVID-shortened campaign.

"Playing for Parkland was amazing, I had such a great chance to develop," said Munro. "We had some great coaches and I made friends that I will have for the rest of my life, it's a great program."