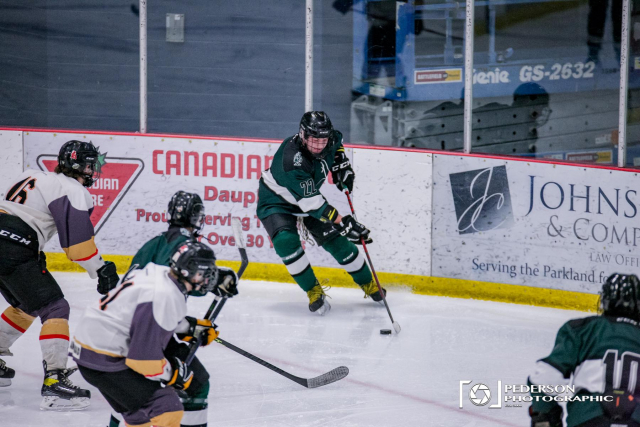 The Dauphin Clippers hockey team is rolling along nicely as they prepare for two games over the next five days against teams below them in the standings. Then again; however, there is no team that is higher than Dauphin in the standings.

Sitting at 8-2 after 10 games, Dauphin has a four-point lead over five teams for first place in the Westman High School Hockey League. The team picked up their biggest win of the season last week in a 9-0 win against Major Pratt. A tough effort against Birtle led to a loss but Owen Chubka recorded a 19-save shutout back on Sunday in a 2-0 win over Boissevain as Dauphin got back in the win column.

Dauphin has scored 48 goals this season and they have been very stingy defensively, giving up just 27 goals. Jason Alf is a part of the team's coaching staff and he has been impressed with how the team has been playing.

"We're still showing a few ups and downs, our most complete game was definitely against Major Pratt," said Alf. "All in all, we're happy with our record and we continue to work on some things moving ahead here."

Of Dauphin's 48 goals, William Miner has scored six of them. He leads the club with 16 points and that amount is just 10 back of the league leader. His 10 assists are tied for the fifth-most in the league ahead of two more games this week for the team.

"William has always been one of the hardest workers on and off the ice," said Miner. "The points he has earned this year are because he works hard. He goes to the tough spots and makes things happen. I couldn't be happier for him."

In the net, the Clippers have a tremendous duo of Chubka and Cody Coombs. Owen has started in six games this season and he has a superb 2.00 goals-against average to go along with a .929 save percentage while Coombs has four starts and he has looked just as impressive between the pipes. They have offence up front, a great defensive core, and the Clippers' goaltending duo makes this club a dangerous threat each night.

"You need a good combination of goaltending, you can't ride one single goalie for an entire season," said Alf. "Chubka continues to get stronger every game and Coombs just continues to play solid and they both give us a chance to win games."