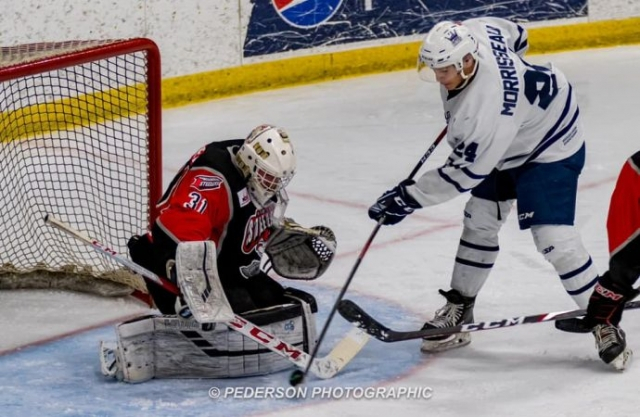 -----
Koby Morriseau played 89 games in the Western Hockey League, most of which came with the Regina Pats after starting his Major Junior career with the Spokane Chiefs.

In the 2019-20 season, Koby came back home as he joined the Kings and immediately became a top-end producer as he scored five times in 10 games and had 13 points. Then he was traded to Portage where he helped the Terriers enjoy plenty of success adding up 26 points in just 21 games. His season that year would ultimately end in Dauphin. The Kings won a double-overtime thriller in game three of the playoffs and the season came to an end just a few days later because of the pandemic.

Koby returned back to Dauphin the following season where he had five points in three games and that brought an end to his junior career on a sour note as once again, the pandemic cancelled the remainder of the season after just a few games. Morrisseau's career on the ice continued last season with the Fayetteville Marksmen of the SPHL but it only lasted one game before he joined the Carlyle Cougars senior hockey club as they play in the Big Six Hockey League.

Koby would dominate scoring 13 times in 14 games and he also added 27 assists as he averaged 2.8 points per game. After the season, Morrisseau wasn't sure if he would play competitive hockey again; however, he will do just that as he's off to Calgary. He recently announced that he's committed to Mount Royal University and that he will play with the Cougars hockey team. He was a Cougar in Carlyle where he dominated and now he's set to be a Cougar in the Canada West conference.

"It's going to be a surreal moment for me, I thought my career was coming to an end," said Morrisseau. "To get another opportunity to showcase what I have, it's a very special feeling. I want to do my part and help this team win a championship."

The Cougars were third in the conference last year as they went 13-6-1 before ultimately coming up short against UBC in the playoffs. Koby will be pursuing a business degree as he heads back to the classroom for the first time since high school. Add a full hockey schedule paired with travel and the former King is set to be an extremely busy man.

"It's going to be a challenge, that's for sure," ended Morrisseau. "I'm willing to take up any challenge that comes my way head-on. I'll do everything to the best of my ability."