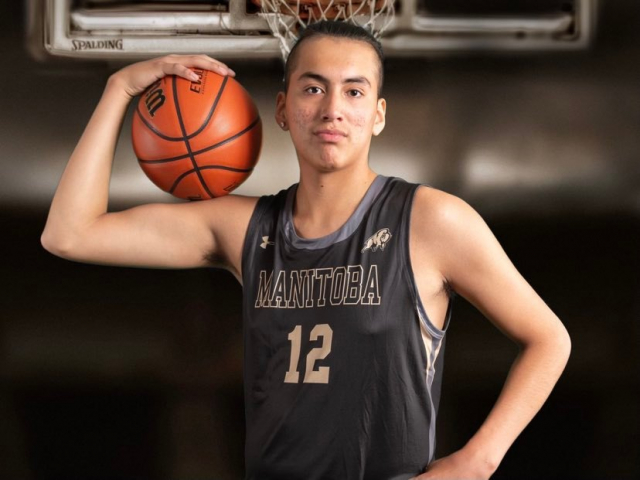 The U17 Manitoba men's basketball team features the top age-eligible players in the province and it is set to be an extremely busy summer for the 15 players that made the team out of tryouts.

14 of the 15 on the roster are from Winnipeg and they play on some of the best high school teams in the province including the St. Pauls Crusaders and Fort Richmond Centurions.

The 15th player on the team is from nearly five hours away from Winnipeg so he will add plenty of kilometres to his car but for this experience, he is perfectly good with that. Mason Chartrand had never tried out for a provincial team in the past but standing in at 6'8", the Pine Creek native thought now was a perfect time. Tryouts were rigorous and Mason was tasked with going up against some elite talent. It's not often that a player from outside of Winnipeg makes the provincial team in basketball so going in, Mason wanted to change that stat and that's exactly what he did.

Mason already defied the odds when he paired up with Kamdyn McKay, Rylan Chartrand and Phillip Desmarais to win the Hoop It Up 3-on-3 national championships in Tempe, Arizona. While Mason was feeling confident heading into Team Manitoba tryouts, he knew it would be a great challenge to make the team and now that he has, he's thrilled.

"It felt so great for me, especially being the only player outside of Winnipeg," said Chartrand. "I'm looking forward to all the travelling and bonding with the team, it's a pretty amazing opportunity for me."

The team will be in Brandon for a pair of games this weekend against Team Saskatchewan. They are then off to South Dakota for a tournament which will be immediately followed up with a tournament in Minneapolis so the next three weeks could include upwards of 15 games. On top of being the only player from outside the city on the team, Mason is also the only indigenous player on the roster.

"That's very special for me," said Chartrand. "I'm very proud that I get the opportunity to represent not just Pine Creek but all of the communities around it. Playing for this team is a dream come true and I will do whatever it takes to help them win."

Following their action over the next three weeks, the team will continue training in Winnipeg ahead of the national championships in Edmonton late next month.