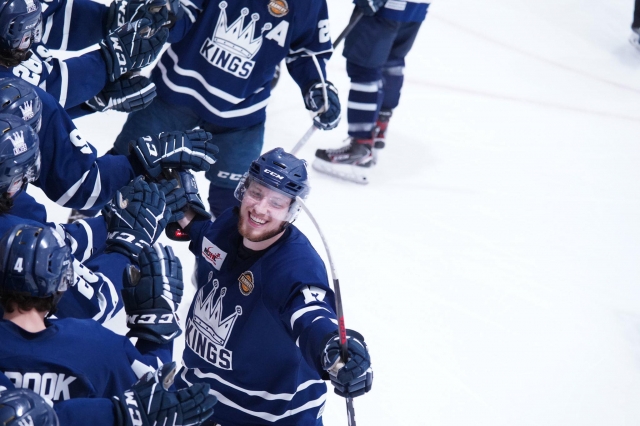 They needed to respond on Saturday night and the Dauphin Kings certainly did that.

Down 1-0 in their best-of-seven championship series against Steinbach, Dauphin responded in a big way with a 5-1 win. The series is now tied at one game apiece heading into game three on Tuesday night.

Opening the scoring in the game for Dauphin was Cordell Coleman as the veteran sniped a sick shot that went up and over the glove of Simon Harkness as Dauphin took a 1-0 lead. Steinbach would find the back of the net for the first time, just 47 seconds into the second period on the powerplay as he one-timed a puck past Carson Cherepak.

Dauphin would take over from there as Klim Georgiev scored the game-winner on a one-time shot 6:02 into the second. In the third, Dauphin scored two goals on the man advantage with Nick Braun and Jayden Harris both scoring while a man up. Logan Calder would also score into an empty-net after making a great knockdown of the puck in the neutral zone and he did the rest.

Carson Cherepak put together another great performance as he made 27 saves, Simon Harkness; meanwhile, made 25 saves.

Dauphin will now host games three and four on Tuesday and Wednesday, both at 7:30. Tickets for the games go on sale starting at noon on Sunday.