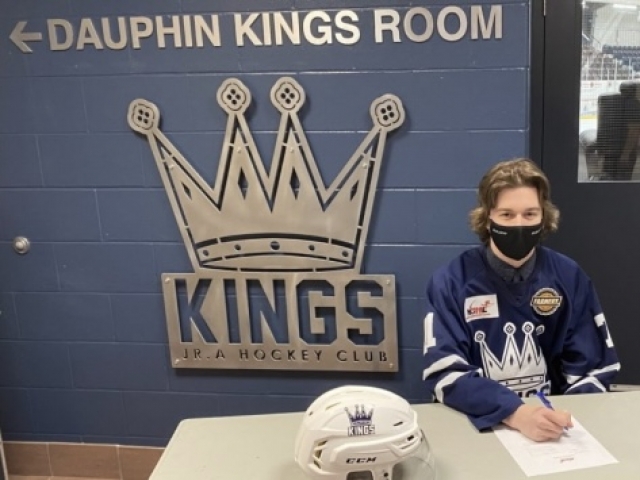 Two local players have signed their Letter of Intent to join the Dauphin Kings in the 2022-23 season.

Rylan Gibbs and Marco Bodnarski both signed their letter on Wednesday afternoon at Credit Union Place.

Gibbs, who turned 18 earlier this week, is having an all-star season with Parkland. He’s scored 14 times and has 29 assists in just 30 games, averaging well more than a point-per-game.

“I’m extremely happy, it’s something that I’ve wanted to do for a long time,” said Gibbs. “Growing up here and watching the Kings all throughout my minor hockey days and now, it’s a dream come true.”

Gibbs offered this is just the start and he’s looking forward to what is next.

Bodnarski; meanwhile, has 22 points this season, two of which are goals.

Marco’s 10 power-play assists are the second-most on the team, behind Gibbs who has notched 16. He’s also tied for seventh in team scoring this year as Parkland is off to a 16-11-3 start.

Bodnarski had this to say after signing his intent.

“It feels amazing, growing up here and watching the Kings, it’s a dream come true,” said Bodnarski. “The team is having a lot of success and I’m very excited to be a part of the organization.”

Just like Gibbs, Marco says he needs to push himself to the next level to be ready for next season.

In a chat with Doug Hedley, the team’s head coach and general manager had this to say on the two local players putting pen to paper.

“It’s really exciting for us. We’ve been trying to get Parkland to be a stronger program for a few years and there is starting to be a ton of talent throughout the region,” offered Hedley. “Both kids are very capable of playing Junior A and we’re excited that it’s going to be with us. We can’t wait to work with them.”