Ebb & Flow Flyers Are Back 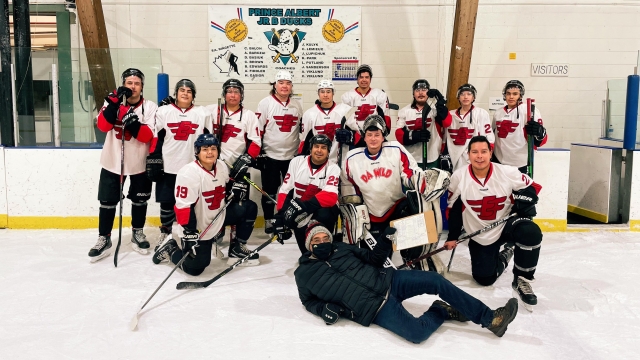 It's been several years since the Ebb and Flow Flyers senior hockey team hit the ice together for a competitive tournament but they are now officially back.

The team made up of players who are all band members of the first nation, hit the road for their first tournament of the season recently in Prince Albert.

Rene Hunter is one of the team's leaders and he says being together as a group means a lot.

"It feels a lot different than playing with other teams," said Hunter. "I'm proud to play with the Ebb and Flow Flyers and to play with guys from home, it makes it that much more special."

When the tournament wrapped up, the Flyers finished in fifth place, an impressive performance for a team that iced a younger roster. The tournament featured 13 teams from across Manitoba and Saskatchewan.

"It was great to go on a road trip with all of the guys, that's what it was all about," said Hunter. "We're trying to get our younger players some more experience and that will come when we can hit the ice more often."

12 of the players on the Flyers also play together in the Dauphin Rec Hockey League on Team Green. The Flyers are back and they're ready to make some noise.

"I'm extremely proud to be a part of the Ebb and Flow First Nation and I love representing our community," ended Hunter.