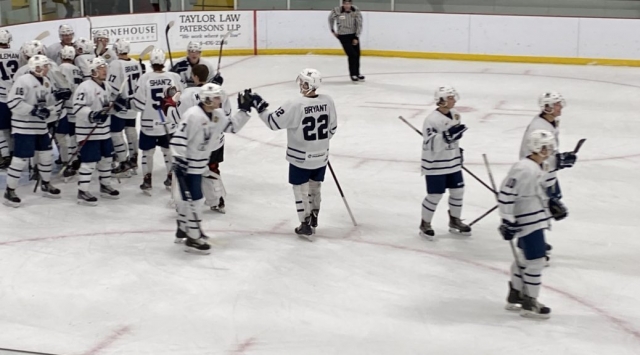 In their first two games of the season, the Kings scored two goals as they opened the season with a weekend split against the Neepawa Titans.

Since that weekend, Dauphin has been shut out once and other than that, the club has caught fire offensively. Coming off a 14-goal weekend against the OCN Blizzard, Dauphin now has 31 goals on the season. That’s tied with the Virden Oil Capitals for second in the West Division, behind only the Waywayseecappo Wolverines.

There were questions heading into the season of where would the team’s scoring come from. The answer to that question is everyone.  15 players have scored at least one goal this season with Kaden Bryant’s five being the most on the team.

Rookies have combined for 36 points this year — 13 of which are goals — and Jayden Jubenvill’s seven assists are the most among rookies.

Jeriah Shantz, who had two goals in the team’s JoFo Cup game has yet to score a goal; however, he has looked very good with plenty of chances and he has four assists. You get the feeling that his first MJHL goal is coming sooner rather than later.

The Kings are 6-2 and the team’s rookies are a massive reason why, without a doubt.

Carson Cherepak’s 5-1 record to go along with his .946 save percentage and 1.67 goals-against average has the Winnipeg netminder near the top of every statistical category.

Keaton Woolsey; meanwhile, played on Sunday for the first time since Dauphin opened their season against Neepawa on September 17.

And as he made his second start on Sunday, Woolsey turned away 47-of-50 shots he faced and was brilliant.

Cherepak is the number one but Woolsey has proven that he can step up when his number gets called.

Colby Jaquet is putting together his best Junior A season and there is no doubt that scouts at the next level are watching. The Winnipeg native now has three goals this season, after he struck twice on Sunday. He now has three goals and 10 assists with his 13 points being tied for the fifth-most in the league. Jaquet’s 10 assists are the third-most.

Parker Malchuk is another player that will be huge in Dauphin’s success this year when he gets back on the ice. He’s been out the past two weekends with an upper-body injury but he was a full participant in practice on Tuesday. Malchuk is one of the best defenders in the league and is also highly effective offensively.

It’s always great when a local team can ice local players and that’s exactly what Dauphin has been able to do this season. Jayden Jubenvill has eight points in seven games, while Dube, Garrett Hrechka, and Hayden Lacquette have all hit the ice multiple times.

Dube has four points, Hrechka has scored twice in four games while Lacquette has one goal and two assists in six games.

Dauphin has played just two teams this season. Neepawa and OCN. Dauphin won three of the contests in each series. Now, the team will open a four-game series against the Virden Oil Capitals over the next two weekends.

Virden is in third in the West Division after a 4-3-1 start. Just like Dauphin, Virden has scored 31 goals; however, they have given up 34 goals, 17 more than Dauphin.

Friday’s game will be played at Tundra Oil & Gas Place in Virden with the two teams returning to Dauphin for a rematch on Sunday evening.