Stampeders Looking Ahead To Friday 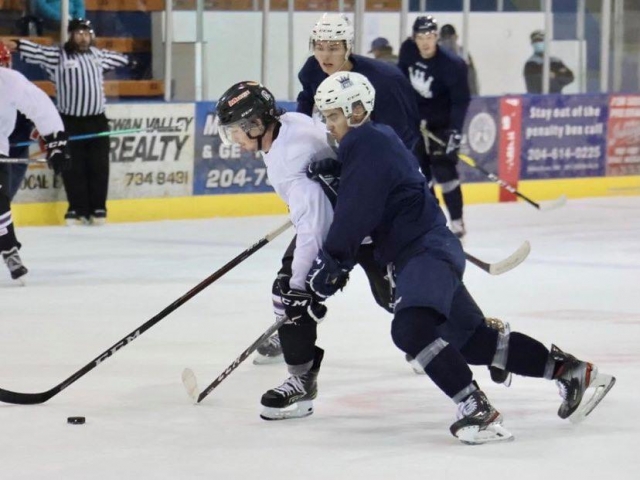 The Swan Valley Stampeders had a chance to take a little bit of a breath on Saturday as they hosted their annual golf tournament at the Swan River Golf and Country Club.

Before the tournament, this year's preseason was a very busy one for the club as they played six games in seven days with their final four games coming in as many days. After dropping to 1-3 following a 6-2 loss against OCN on September 8, the team finished their preseason with two straight wins to end at 3-3.

In their final tuneup game against Waywayseecappo, Swan River's Jamie Valentino scored once in a 4-1 win. The Stampeders averaged three goals per game while they gave up 20 across the six contests.

Barry Wolff returns as head coach and general manager this season and he says playing six games was a positive for the team as it allowed the rookies to get plenty of ice time while allowing the club's returning players a chance to get a good amount of reps in after last year's shortened season.

"We got what we wanted out of it. It also allowed us to put players in different situations," said Wolff. "We also had a chance to identity for the future which is always a positive."

The Stampeders kick off their 2021-22 season on Friday night as they welcome the OCN Blizzard to the Centennial Arena. This year's roster has been trimmed down to 24 with a few days until puck drop, which includes Dylan Black who was on last year's team while Carter Cockburn looks to enjoy his biggest season as a Stampeder yet playing for his home team.

Jackson Betcher and Trey Sauder, both of Swan River also saw extensive action in the preseason. Sauder is looking to make the team after playing with the Parkland U18 Rangers last season while Betcher will be one of the team's top defenders.

A question for the organization is where will Steven Arp end up. He started his season by putting up eight points in the U18 Rangers intrasquad game and he scored twice in three preseason tilts with Swan Valley. Now, the Swan River native is in Medicine Hat as the Tigers of the Western Hockey League open up their training camp.

At this point, there are three options where he could end up this season. One being with the U18 Rangers, the other would see him suit up for his hometown MJHL team, and the other option is staying with the Tigers.

At this point, it's too early to tell where he may end up but wherever it is, Barry Wolff knows big things are on the way for the young man from Swan River.

"There's no question that he has a bright future, he's a big strong kid," ended Wolff. "He can skate and he can shoot. We're excited to see how his career pans out, whether that's with us or in Medicine Hat. We're right behind him and we'll be cheering him on the entire time."