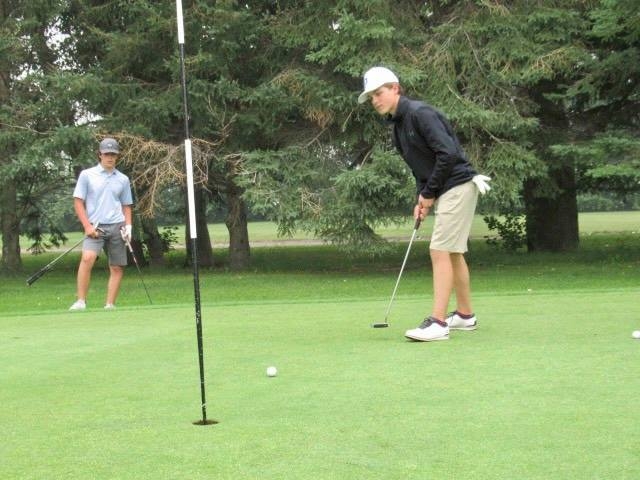 Junior golfers in the Parkland continue to impress in tournament play around the province. Last summer, Hayden Shtykalo was a winner on the Westman Junior Tour and playing in just his second event this season, he's once again a winner.

Playing in the 14 & under division at the Glen Lea Golf Course Tuesday, Hayden posted a 7-over, 77 to win the event by three strokes. He ended up beating Luke Myhre, also of Dauphin, and Jaxon Jacobson of Brandon by three strokes.

It was Hayden's second event on the tour this season and he plans on playing in two more.

"It feels really great, it's one of my lowest scores ever in a tournament," said Shtykalo. "I'm happy that I was able to get it done."

Ryan Gower of McCreary finished in fourth with his 83 while Quinten Fisk was just two strokes back with his 85. Landyn Garton of Dauphin was closest to the hole in group b.

Hayden says his short game around the greens and putting has allowed him to start playing more consistently on a day-to-day basis. He'll continue to play nearly every day at the Gilbert Plains Country Club and come next month, Hayden's focus will switch to hockey.

Playing with the U13 AA Kings last season, Hayden is looking to make the jump up this season. He will look to make the Parkland U15 Rangers for the first time as hockey is set to return in the province. On top of being on the course, Shtykalo says he's been working hard in the gym as camp continues to near.

Hayden grew up watching the Rangers and he's looking forward to giving it everything he has as he looks to crack the Parkland's top U15 AAA team.

"It would be a very exciting opportunity if I made the team, but I know it's going to be very tough," ended Shytkalo. "There will be a ton of talent from across the region, I just have to do my best and we'll see how things go."

In other Parkland golf action, Jackson Delaurier came up just short of advancing to a playoff on the Maple Leaf Junior Tour's bantam boys event at the St. Boniface Golf Club which wrapped up on Tuesday evening. Jackson opened the tournament with an 84 before rebounding with a 75 on day two.

Hayden Delaloye of Neepawa was successful in a playoff, meanwhile. He won the juvenile boys division after outlasting Austin Boge.