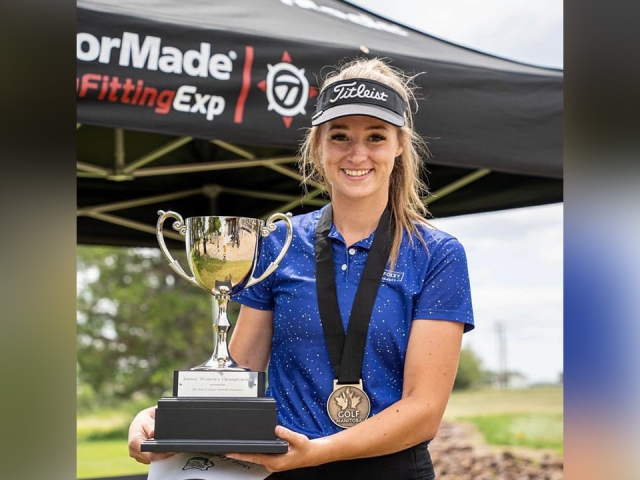 Clara Peake picked up the game of golf three years ago and now the Binscarth native is on top of Manitoba and is set to play against the top junior women in Canada.

Peake had four birdies in her final round earlier this month as she won Golf Manitoba's junior women's provincial championships at the Shilo Country Club.

"I honestly still can't believe it, I surprised myself with how well I played," said Peake.

Less than a week after winning the junior crown, Peake was in Winnipeg playing in the Manitoba amateur women's championship and the Parkland golfer enjoyed another solid week as she finished in 10th place, the highest of any junior in the event. Crystal Zamzow of Swan River finished in 11th.

In a matter of three years, Clara has gone from not playing the game at all to being a provincial champion and she credits a lot of her success to all of the help she received south of the border. Clara spent two months at the Sean Foley Performance Academy in Lake Mary, Florida. Foley is one of the top coaches in the world.

"That was pretty incredible, to be able to learn from one of the best instructors in the world," said Peake. "It was an experience that I will never forget and I'm looking forward to moving forward with my game, I learned a ton."

Clara says her ultimate goal is to join Brooke Henderson on the LPGA Tour and before that, she hopes to get a scholarship to play south of the border. But for now, that's all in the future as she focuses on the challenge at hand. Peake is in Leduc, Alberta for the Canadian Junior Girls' Championships that start on Tuesday and end on Friday.

Playing in a national championship will without a doubt be a challenge, but Peake has proven that she has the ability to stay consistent which is why she's this year's junior provincial champion.

The Binscarth native says her main goal is to enjoy the experience and the rest should handle itself.

"I didn't even think I would make the nationals this year so to be here, it's a pretty incredible feeling," ended Peake. "I'm really excited about this journey and we'll see how it goes."

Clara will tee off at 10 a.m. on Tuesday. Crystal Zamzow will also play in the event, with her first-round tee time set for 1:40 on Tuesday afternoon.