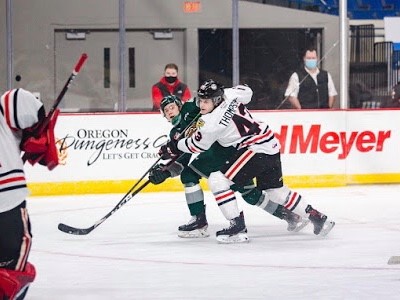 Ryder Thompson started his season with the Waywayseecappo Wolverines of the Manitoba Junior Hockey League (MJHL) where he would play in eight games, recording three points. When the league postponed its season in November and ultimately cancelled it, Ryder found himself without a place to play.

At least, in Canada. From Russell, Thompson relocated more than 21 hours away from home as he joined the Portland Winterhawks of the Western Hockey League (WHL). Ryder -- who is the younger brother of Josh Thompson who was off to a great start with the Parkland Rangers before the season was shut down -- was drafted 105th overall by Portland in the 2019 WHL draft.

His draft year was spent with the Rink Hockey Academy Nationals Elite 15's where he served as the team's captain and chalked up 13 points in 29 games.

Now, Thompson has played six games with Portland, a team that won last year's regular-season title after they had an outstanding 45-11-3-4 record which gave them 97 points, the most in the league.

And getting the chance to play with Portland this year, is a dream come true for Ryder.

"It's been surreal, I've been dreaming of playing in this league since I was like five years old," said Thompson. "It's an awesome lifestyle. I get to go to the rink, practice, workout, and then play against some very elite competition, it's been a great experience."

In a season comprised of just 24 games, this year isn't as much about winning or losing, it's more about developing young talent and Thompson is getting that opportunity. But, just because it is a developmental season, that doesn't mean any member club of the league is taking it easy.

Playing against just U.S. Division teams this year, Portland is 4-3-2 as they find themselves in a tie for second with the Seattle Thunderbirds. The Everett Silvertips have been the class of the division so far as they're 8-1 which gives them a six-point lead at the top.

"All the guys were pretty bummed that they couldn't finish the season last year, everyone believed they could win a title," offered Thompson. "So everyone's goal this year is to succeed, we want to win as many games as possible.

Ryder has played in six games so far with Portland and he has one assist as his first career WHL point came on March 27 in a 3-2 defeat against Seattle. Next up for Ryder and the rest of the Winterhawks is a pair of games this weekend in Spokane.

"I feel like I'm getting more comfortable and I understand more what I need to do to succeed," stated Thompson. "I've been pretty happy with my game, with that said, I'm not satisfied. I need to improve a lot and I'm looking forward to this journey."

Ryder also had great things to say about his time in Waywayseecappo, although it was just a short stop. It was a stop that gave him the chance to play with his brother in a preseason game and play under the leadership of Taylor Harnett and Josh Lee.

"The organization was tremendous to me," ended Thompson. "We had such a great group of guys and the coaching staff is top-notch, they have a very bright future, without a doubt."