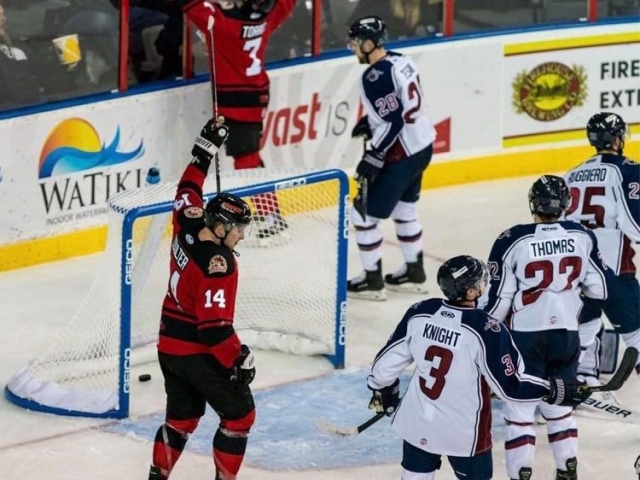 Tyler Coulter was just 16-years-old while he was playing with the Brandon U18 Wheat Kings when he received his first big break. After a tremendous start to the season, Tyler was given an opportunity to play with the big boys as he was called up by the Wheat Kings of the Western Hockey league.

From Brandon, Coulter spent many nights inside Westoba Place cheering on his hometown WHL team and he was now living out his dream of playing with them as he suited up in three games.

"It was pretty special to me. Ryan Stone who played with the Wheat Kings billeted at our house previously and I always wanted to follow his footsteps," said Coulter. "It was an incredible feeling playing for my hometown WHL team at just 16-years-old."

Tyler finished his AAA regular season that year with 61 points, 33 of which were goals as he posted a career-high. He also scored five goals in seven playoff games and had eight points. That year was ultimately Tyler's final with the AAA team as he joined his hometown WHL club on a full-time basis the following season.

As we flashback to the 2013-14 season -- his first in the WHL as a full-time player --, Tyler scored eight goals and had 13 points. Tyler would help Brandon advance to the WHL final in 2015 with 11 points in the playoffs where the Wheat Kings would come up short against the Kelowna Rockets.

Back in Brandon for the 2015-16 season, the Wheat Kings were the class of the WHL. After posting 48 wins and winning the East Division by 18 points, the Wheat Kings once again advanced to the league final.

This time, no one was stopping Brandon. Coulter had one goal and one assist on Friday, May 13, 2016, as the Wheat Kings doubled up Seattle, 8-4, to win the WHL title. Coulter posted another 14 points on their way to the title.

"It's pretty surreal looking back. Winning a WHL title was something I had always dreamt of," offered Coulter. "Sharing that trophy with my family and friends, those are moments that I will never forget. Especially winning it with my hometown team, what a year."

Tyler played the following season with Brandon before he turned professional when he joined the Jacksonville Icemen of the ECHL and he also played 11 games with the Calgary Dinos in the 2017-18 season.

The 2018-19 season would see Tyler pack up his bags once again as he moved overseas to Sweden as he started the campaign with Tyringe SoSS of the HockeyEttan league. After a run that saw him put up 24 points in just 20 games with Tyringe, he was dealt to Kristianstads IK where he would help the team win a title. The Brandon native had two points in 14 playoff games as he added to his trophy case with a Swedish league championship.

"That was a super neat experience, I didn't really know what to expect going in," said Coulter. "I loved my time in Sweden and it was great capping it off with that title."

Tyler came back to North America following his year in Sweden as he signed with the ECHL's Rapid City Rush and he immediately became a top contributor for the team as he posted 39 points in 47 games.  A longer than usual offseason has led Coulter right back to Rapid City as he's an assistant captain on this year's team.

10 games into the season, Rapid City is off to a tough start at 2-8, but Tyler is off to a great start. He's scored two goals and added four assists in his eight games played while Peter Quenneville, who played with Tyler in Brandon has five points in seven games.

"I'm just happy to be back on the ice playing the game I love, that's what matters," ended Coulter. "I'll continue to do anything I can to help this team win games and we're looking to turn things around here."