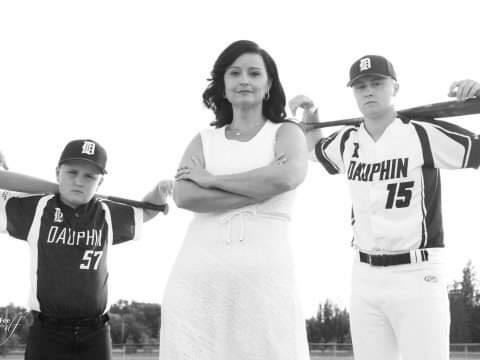 The 2020 baseball season in Manitoba was very different than in other years. Although different, baseball was still being played throughout the province and Baseball Manitoba has put together a campaign to recognize some of the hardworking people that helped assure there would be ball played in different communities.

Jodie Romanow is the President of Dauphin Minor Baseball and she is one of the members that worked extremely hard to get a season going in Dauphin. Jodie was nominated and Baseball Manitoba is now recognizing her for all of her efforts.

Jodie's nominator had the following to say.

"Over the past several years, Jodie has shown enthusiasm for helping her community through fundraising and financial management, and she usually takes the greatest burden of work along with her husband (a coach) and son (player and umpire). She has worked on topics such as website development, diamond improvement (including accessing grants), planning and hands-on installation of improvements, and game and umpire scheduling. Jodie is enthusiastic about everything baseball-related. She pushed through the difficulty of the 2020 season (due to COVID-19) and continues to work hard to make the improvements needed in her community."

Romanow just finished her fourth year as president and she says there have been some twists and turns, but just being able to be a part of the game is special to her.

"It means a lot to me to know that I have a hand in creating a program that gives the best opportunity for baseball in Dauphin," said Romanow.

Jodie isn't sure who nominated her, but she appreciates the support that she has received over the years.

"It's quite an honour to be recognized like this," said Romanow. "It's always a great feeling getting recognized for anything you do."

Romanow says she works with a tremendous team and she's looking forward to the upcoming baseball season.