Nkwama Strives For Success In Melville 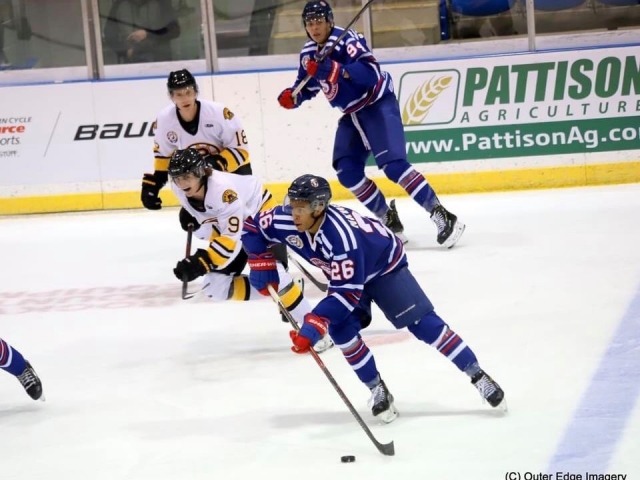 If you look up dedication to the crest in the hockey dictionary, there is a good chance you will find Luke Nkwama's name. The Outlook, Saskatchewan forward is now in his third season with the Melville Millionaires, and the first two weren't exactly friendly.

Although Luke had 55 points combined in those first two years with the Mills', it was never about points. He's been about the team winning games from day one.

"I still gained a ton of experience in those first two years, even though we weren't winning a ton," said Nkwama. "It was all about sticking to the process and learning every day and I believe I did that."

Nkwama is back in Melville for his third season and it is off to a much better start than any season in the past. After blowing a two-goal lead in their first game against Estevan earlier this month, the Millionaires are on a roll.

The team has won three straight games -- they have 12 scored goals in the process -- and they lead the Viterra Division by one point over Estevan and Yorkton. The current three-game win streak that the Mills' are enjoying is also the first that Nkwama has been a part of. In his first two years, the team never won three games in a row.

"It's been an awesome start to the year. We really should be 4-0, but it is what it is," said Nkwama. "Everyone has come together really well, and it's a ton of fun winning games."

Nkwama's 38 points last year were the second-most on the team. His 22 goals were also the most on last year's team and he's picked up where he left off. In just four games this season, Luke has already scored two goals while he's also added two assists.

His four points are only behind Reece Newkirk, Jaydon Dureau, and Landon Kosior, all of which are on loan from Western Hockey League teams right now.

"I'm playing a big role here this year so I expect to be a point-per-game kind of guy," offered Nkwama. "With that said, I just want to win. Points are nice but winning is even nicer, and I think that's what everyone wants, to win for this great organization." 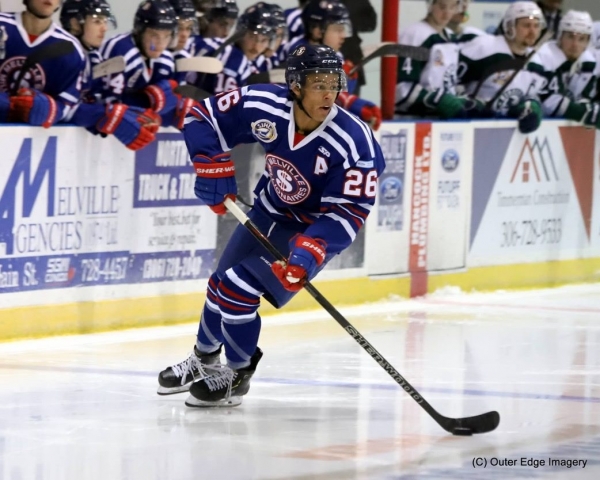 Melville continues its preparation ahead of another two-game weekend set against a rival. They welcome Yorkton to town on Friday before they head to Yorkton on Saturday. Yorkton is one point behind Melville entering the weekend so the Millionaires have a great opportunity to jump a few points ahead of their biggest rival.

And even though there are only 150 fans allowed in the stands, Nkwama can still tell when the team is playing Yorkton compared to any other team.

"They have a great team and we know they're going to be a very tough challenge for us," said 'It's always enjoyable playing against your rivals and we'll see what we can get done."

Luke joined Melville after a 29 point season with the Prince Albert U-18 AAA Mintos. Before playing with Prince Albert, Nkwama played in Melville. He played 140 games combined with the U-15 and U-18 AA Millionaires. In 2016-2017 season, he had 46 regular-season points and another four goals and nine points in nine playoff games with the U-18 Millionaires.

The Horizon Credit Union Centre is an arena that he has played in a lot and as Nkwama says, he wouldn't have it any other way.

"It's an honour to be playing for the Millionaires especially after playing minor hockey here," ended Nkwama. "I will cherish the friendships I have made for the rest of my life, it's been a great time playing here."