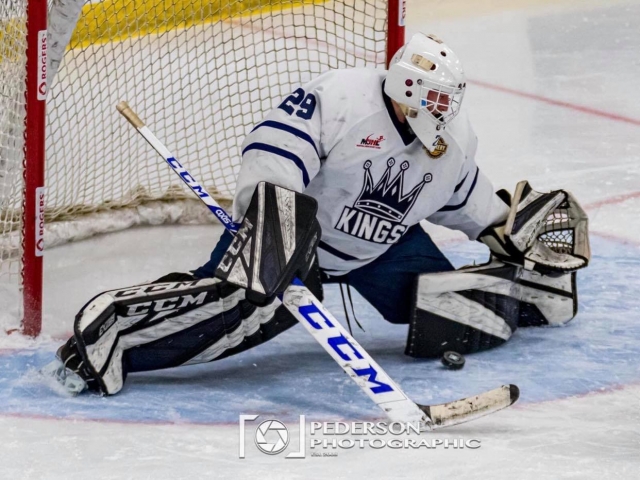 Another week of practice is well underway for the Dauphin Kings as they prepare for a four-game set against the OCN Blizzard that begins on Friday night at the Gordon Lathlin Memorial Centre.

Parker Fofonoff and Kaden Bryant were back skating with lines at Tuesday's practice. Both players haven't played in a regular-season game this year yet. In net, the goaltending duo of Matthias Smith and Mathias Savoie continue to work hard with Smith starting all four games this year so far.

He's gone 2-2 with a .921 save percentage and a 2.47 goals-against average. Smith has won both Saturday games this season and he has played excellently in both. In a 7-0 win back on October 10, Smith turned away all 30 shots he faced.

One week later, Matthias was stellar once again as he made 41 saves in a 5-1 win for Dauphin in front of their home crowd at Credit Union Place. Matthias has played 33 more minutes than any other goalie in the league with Reid Dyck of the Winkler Flyers playing 186 minutes.

"I think things are going pretty well. Opening night was kind of tough, I just needed to regroup and think of it as one game," said Smith. "The guys are playing unbelievably in front of me as well. We're getting better every single game and that's huge."

Smith is once again billeting at Kailey Armstrong's house this season which means he spends a ton of time with her son, Dane O'Shea. The three have formed quite the bond last season and moving into this season.

"Being away from home for so many months, being comfortable is extremely important," offered Smith. "I definitely feel right at home here with the Armstrong's. Whatever kind of day I have, I can go there and just feel good and relaxed."

Stay tuned in the coming weeks as Darnell Duff will be chatting with different billets and coming up this week during the Dauphin Kings Power Play Show is Lindsey Kyle.

Prior to joining the Kings, the 19-year-old played in his home province of British Columbia and with the New Hampshire Jr. Monarchs U-16 team. Matthias also played in 36 games last year with Dauphin where he had a 3.55 goals-against average to go along with a .889 save percentage.

In his first four starts last year, the second-year King turned away 92 of the 104 shots he faced. This year in four starts, Smith has made 105 saves on 114 shots. He has certainly taken a step ahead and he does believe the team, in general, has as well.

"Yeah, we're coming together really well. The new guys on our team have been welcomed really well," said Smith. "I think we have a really strong team and we're pushing ourselves to be better every day."

You can hear Darnell Duff's full chat with Matthias coming up on the Power Play Show after the 4:00 p.m. news, weather, business, and sports on Friday.