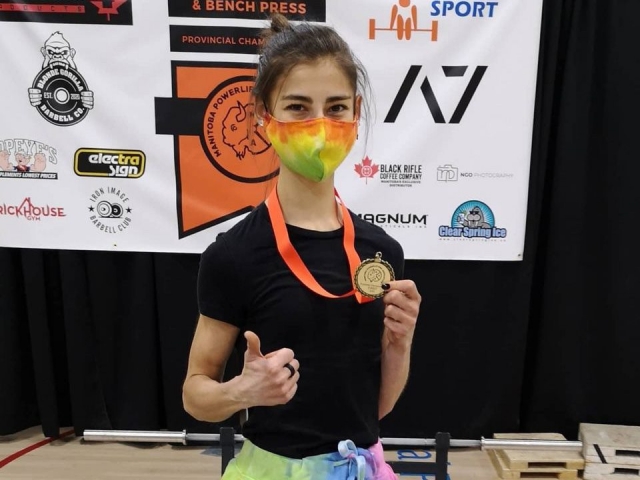 When Taylor Armstrong puts her mind to something, there's a good chance that she will do a great job in whatever she is preparing for and that's the case for the young woman from Dauphin.

She's embarked on a new journey in her life and it's competing in powerlifting competitions. It all started last November when she started training several times per week. Powerlifting wasn't even on Taylor's radar a year ago and now, she's a provincial champion.

"I got into weight lifting as a stress outlet and a way to better myself," said Armstrong. "I wanted to focus on being strong and not just skinny."

Taylor hasn't had a coach for her entire journey which means she has had to learn everything by herself along with some help from a family friend. She put all of her hard work to the test for the first time in February when she took part in the Brickhouse Power Challenge.

Armstrong racked up 306.81 points to win her age category and weight class. Placing first only fuelled her passion for powerlifting as she continued to train for the provincial championships that were hosted this past weekend in Portage la Prairie.

"I really didn't know what I was doing when I first started," she said. "As the months have gone on, I've developed my training style and what works for me and what doesn't."

The Dauphinite says the most important thing from the very beginning is having fun and that's what she's having as she becomes one of the top young powerlifters in the province all in the matter of one year.

At the provincials competing in the sub-junior category, she added up 185 points. She finished with 57.5kg in her squat, 40kg in her bench press and 87.5kg in her deadlift. Just as she did in February, Armstrong came out on top of her competition as she won her first-ever provincial powerlifting gold medal.

"It felt really good. A lot of people have told me that this isn't a real sport or I'm not that strong throughout the way," said Armstrong. "It felt really cool to show people how hard I have worked over the past year and it's incredibly special to know that I've won a gold medal."

Taylor says one of the best parts of competing is seeing all the other competitors lifting the weights and living out their dreams. Another part of her enjoyment is spending time with her mom, Jamie Derhak who has been right by her daughter's side the entire time.

"She has been my number one supporter and she's my rock," ended Armstrong. "I'll never forget the memories we have shared together at all of the meets and everything."

The provincial gold medallist will continue training as she prepares for future competitions.