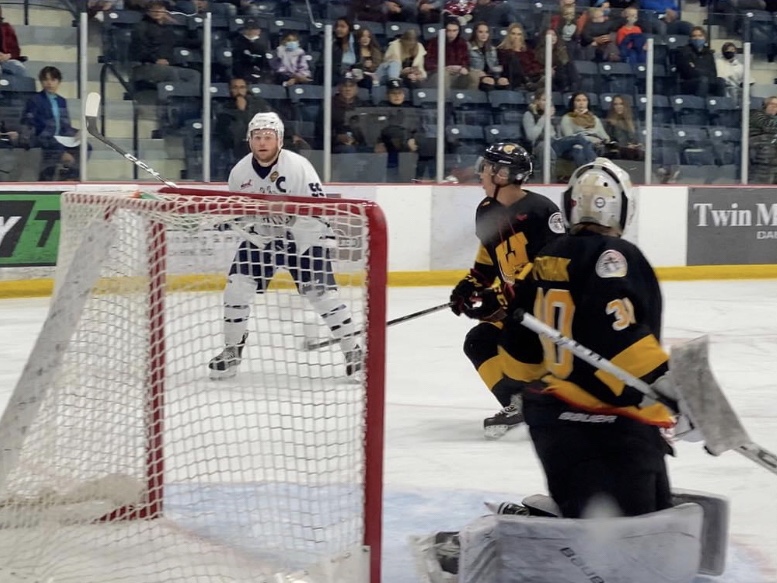 Tied atop the standings in the Northwest Division, the teams are coming off a weekend split in which Wayway won the opener, 7-3 before Dauphin rebounded with a 7-0 win.

So with one successful punch each, the teams open another weekend set of games with the rematch being played in Dauphin tomorrow.

The Wolverines are now 17-10-4 in their last 31 home games dating back to last year despite Saturday's defeat.

"The intensity to detail has to be there and we have to be really strong defensively," said Doug Hedley, Head Coach, and General Manager. "If we play strong defensively, we will be in the game and we're going to need a solid effort from the top to the bottom of the lineup."

Just like Matthias Smith did, Brendan Forman had an up and down weekend. He was very good on Friday when he made 30 saves on 33 shots which included a highlight-reel save as he robbed Vincent Nardone.

Brendan Forman (01) with a large cross-crease stop 🛑 for the @mjhlWolverines in his first win.#MJHLOpeningWeekend pic.twitter.com/c97leU4ERD

Dauphin would come out with a different offensive touch on Saturday and they lit up Forman as he made just 29 shots on 35 saves in a defeat. The former Humboldt Bronco is definitely capable of making big saves and winning his team a hockey game.

For the Kings, Matthias Smith gave up six goals on Friday before he went 30-for-30 on Saturday as he earned his first shutout of the season. Tonight's game continues a busy stretch of divisional play for Dauphin who will including tonight play their next six games within the Northwest Division.

After that, they play two out of division games before returning to the division for another eight straight against Northwest Division teams. It's certainly a unique format, but it's one that Hedley has enjoyed as the Kings look to get above the .500 mark tonight.

"It sure brings the rivalry back, that's a guarantee," said Hedley. "Emotions were high near the end of game one and all night in game two. It's almost like a playoff series and as long as games are tight and close, these players will be playing with that fire in their belly."