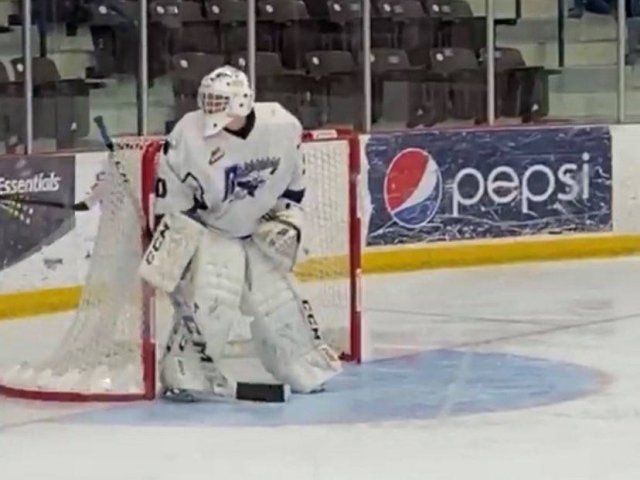 Liam Jardine was great with the Pilot Mound Academy varsity team in the 2017-2018 season. Playing in the Canadian School Sport Hockey U-17 League, Jardine sported a 1.44 goals against average to go along with a .925 save percentage.

After that season, the goaltender originally from Neepawa moved to Dauphin to join the Parkland U-18 Rangers where he joined Keaton Ziprick between the pipes. Ziprick would play the majority of the games; however, Jardine did suit up in 17 throughout the campaign.

"I thought it was lots of fun, we had a great group of guys and we all got along really well," said Jardine. "We didn't enjoy the success that we wanted, but I think we opened some eyes and played some pretty good games."

Jardine billeted at the Chubka's with Taggert Plouffe who had 34 points last season. Jardine had a strong bond with many players on the team, but there was no doubt that he became closest to Plouffe who turns 18 in March.

"Living with the Chubka's was tremendous, they really welcomed me with open arms," said Jardine. "I shared the basement with Taggert so we became really good friends and enjoyed some great times together. He's an awesome guy and I'm happy I was able to spend the year living with him as well."

Liam went from Pilot Mound to Dauphin within two years and now, the Neepawa native has made his way to Stonewall to continue his hockey career. He's joined the Stonewall Jets of the Manitoba Major Junior Hockey League (MMJHL). The former Ranger wasn't even sure if he was going to play hockey this year. In the offseason, he had sent emails to teams letting them know that he was interested in getting the opportunity and after a little bit of a wait, Stonewall came knocking.

They said they were looking for another solid goalie to join Adam Swan who is a former draft pick of the Western Hockey League's Lethbridge Hurricanes. The team cut their roster down last Wednesday and Jardine will remain with the team as he shares goaltending duties with Swan who has also played in the MJHL most notably with the Winnipeg Blues.

"Things are off to a great start, it seems that we have a great group of guys," said Jardine. "We've hung out a few times and it's always been a blast, so that's great."

The preseason is now underway and Liam certainly got off to a solid start. He made 17 saves on 18 shots and earned the win as Stonewall cruised past the Transcona Railer Express, 5-2. The regular season will begin later this month and Jardine is confident in the team's abilities after that 5-2 preseason win. The team went 25-18-2 last year which finished them in fifth place.

"Our expectations are pretty high, we have lots of returning guys," ended Jardine. "They did fairly well last year and our goal is to improve this year and push for a championship."

Liam returns to the ice for the team's final preseason game on Friday.