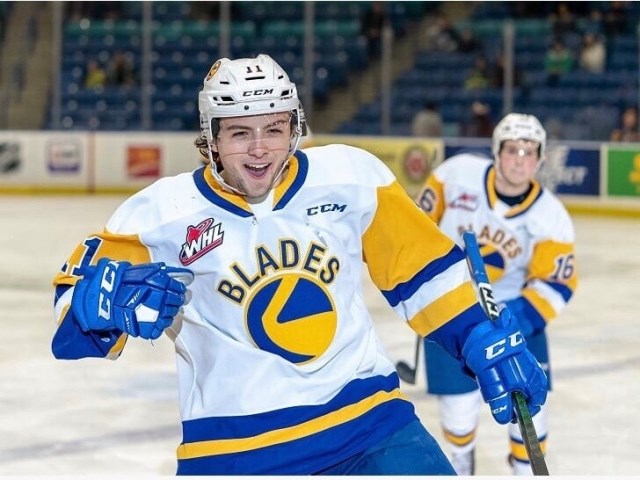 It would come as a complete shock if the New York Rangers didn't use their first-overall selection to pick Alexis Lafreniere as the NHL draft begins on Tuesday evening, virtually. The Canadian superstar from Saint-Eustache, Quebec has recorded 327 points in just 193 games in the Quebec Major Junior Hockey League with the Rimouski Oceanic.

At the last edition of the IIHF World Junior Hockey Championship, he scored four goals and added six assists for 10 points in just five games. A mock draft heading into the evening has Quinton Byfield, Tim Stützle, Cole Perfetti, and Lucas Raymond could round out the top five.

Rounds two through seven of the draft will begin on Wednesday morning. Betty and Dan Caruk of Dauphin will certainly have their eyes on this week's festivities as their grandson, Tristen Robins is eligible to be selected.

The Clear Lake native has played in 144 games in the Western Hockey League -- 143 of which have come with the Saskatoon Blades -- while his WHL debut came with the Regina Pats. Robins recorded his first WHL assist with Saskatoon in the 2017-2018 season.

The draft was originally scheduled to take place on June 26-27 at the Bell Centre in Montreal; however, it was postponed due to the novel coronavirus and now it will take place virtually.

"I think having these last few months has given scouts and teams time to do more research on me as a player and I think that's why my draft stock has improved," said Robins. "To be honest; however, this summer hasn't really been any different than any other. I've been training five times a week and giving it my all."

Robins enters the draft as the 86th ranked North American skater. After a 25 point season in his rookie campaign, Robins broke out last season as he posted 73 points -- most of which came after a slow start -- when he recorded just 22 points in his first 31 games.

After the Christmas break, Robins came back to the Bridge City as a new man as he put up 51 points, 23 of which were goals in his final 31 games. He finished the season 14th in league scoring and third among draft-eligible players.

"That's a pretty huge feather on my cap, I'm very excited to watch this draft with my family," said Robins. "Whether I get selected or not, I'm really excited to share that moment with my family if I'm given an opportunity by a team."

So more than three months after the original dates in late June, the draft will begin on Tuesday at 7:00 p.m. Robins is projected as a mid-round selection which means he would be selected Wednesday if that's the case.

He doesn't have a team in mind when it comes to who he wants to get drafted by, he just knows it would mean everything to see his name on the board.

"I'm through the roof right now, I'm so incredibly excited," offered Robins. "I've had these days circled on my calendar for a long time and I can't wait to see how it all unfolds."

Ahead of Tuesday's first round, Tristen has chatted with all 31 organizations via Zoom or over phone calls. In fact, he just got off an hour-long Zoom call on Tuesday afternoon.

As noted above, Robins is the 86th ranked North American skater; however, it certainly wasn't always the case.

He was the 134th ranked North American skater in the midterm rankings, meaning he jumped up 50 spots.

Only first-round hopeful Seth Jarvis had more points in the same span of games, and among draft-eligible WHL players, only Jarvis and Connor Zary had more than Robins’ 73 points at the end of the season.

In other draft news, several Brandon Wheat Kings are also projected to be drafted today including Braden Schneider who is expected to be picked in the first round.