Foucher Is Back In The Valley 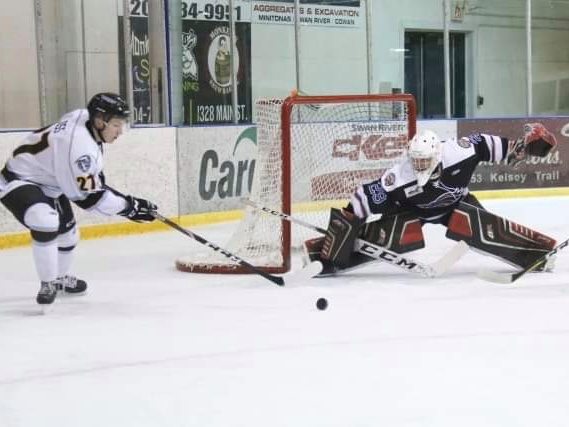 Just as many other teams in the MJHL did, the Swan Valley Stampeders held their main camp over the weekend inside of the Centennial Arena.

Starting on Friday morning, the Club conducted skill sessions and several scrimmages also took place over the course of the three days. The list of players was capped at 34 and included a solid veteran presence and some Parkland prospects.

Will Munro, Stephan Arp, Zack Boychuk, Bo Eisner, and Matthew Munro, all of Swan River competed in the camp. Mikael Foucher who had an all-star type of season last year was back between the pipes as the Stampeders push to the regular season continues.

"It's been great, the intensity over the weekend was tremendous," offered Foucher. "There are a lot of new faces, it was exciting to see them trying to make the team, it's been fun."

As a 20-year-old, Mikael knows he has just one more season of junior hockey to impress scouts at the next level and his off-season routine was full of workouts and preparation as he looks to help the Stampeders make the MJHL playoffs again, something they've become accustomed to over the past several years.

"I was hitting the weights a ton in the offseason, I want to continue getting bigger and stronger," said Foucher. "I want to be intense and help this team win games."

Swan Valley won 35 games last season and finished fourth in a highly competitive year in which eight teams won at least 31 games. They were up 2-1 on Waywayseecappo when the season was cut short due to the novel coronavirus and they put up 10 goals in game three against the Wolverines.

Barry Wolff had a busy summer adding pieces that the team had lost due to graduation after that game and Foucher is thrilled with what he's seen so far.

"The skill level is great, it's been super competitive," ended Foucher. "We have a lot of speed, we have some big guys, and we have skilled guys. It's going to be really interesting to see what we can do come October 9."

Swan Valley will play in the Northwest Division this year alongside the Dauphin Kings, Waywayseecappo Wolverines, and the OCN Blizzard. Each team will play each other eight times and each team plays their non-divisional opponents twice throughout the season.

Four games in nine days to begin the season for the Stampeders will begin on opening night. The first of eight Parkland battles is November 20 at the Centennial Arena and Darnell Duff will have the call of that game beginning at 6:45. That's the first of four straight between the Parkland rivals in a matter of nine days.