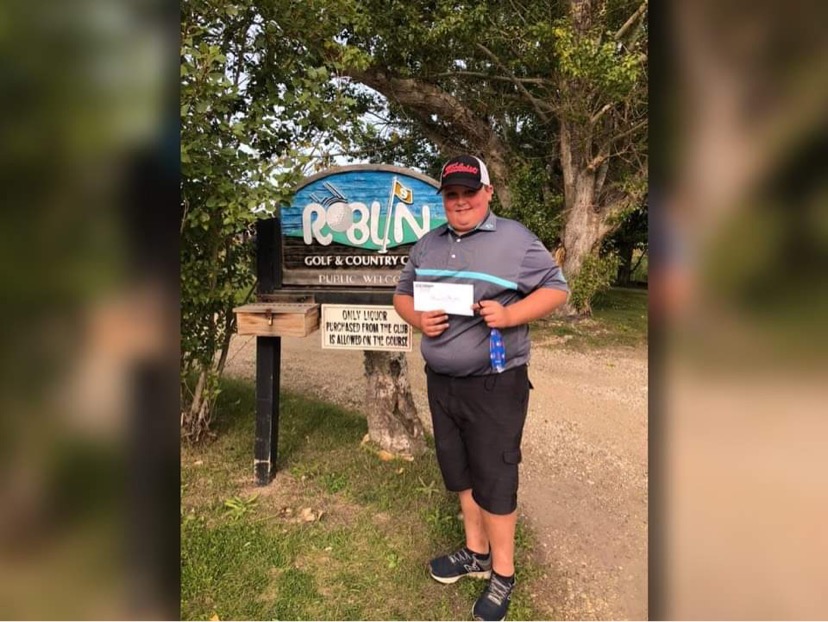 During the winter months, you'll often find Mitchell Rauliuk down at Credit Union Place cheering on the Dauphin Kings and volunteering his time to help the team out any way they need. When it comes to where you'll see Mitchell in the summer, that answer is likely the Gilbert Plains Country Club.

Mitchell also volunteers his time to help out in any way he can at one of the Parkland's premiere golf destinations; however, he also gets the chance to get out on play with his dad Ryan who owns Ruff's Furniture here in Dauphin and some other Parkland juniors.

The young man from Dauphin has spent many hours on the driving range and on the course working on his game and he's also gotten some help from the friendly staff at the Country Club.

"I'm striking the ball quite well thanks to Scott McCallum and Chad Facey, they have helped me a ton throughout the season," said Rauliuk. "I don't get perfect accuracy all the time, but I'm certainly improving and I get some birdie chances every round so that's always nice."

With his parent's camper being parked at the campground in Gilbert Plains throughout the summer months, Mitchell is just a hop and a skip away from the pristine golf course.

It's just in recent years that he is starting to take the game more seriously and he's certainly reaping the benefits of hard work and commitment.

"It's just a really fun sport. I get to enjoy time with family and friends doing something I really enjoy doing," offered Rauliuk. "When you start shooting good you get really happy and even when I'm not shooting the best, I know I'll get another chance. It's just a great place to be."

Prior to this past weekend, Mitchell played the Roblin Golf & Country Club once this season. That round ended up being a practice round as he played in the Club's junior tournament over the weekend and the middle school student from Dauphin has now joined the winner's circle.

With a 51, Rauliuk won the 12-14-years-old age group. It was the first tournament win of the season for Mitchell and if he continues with what he's doing, it could be the first of many in the years to come.

"It felt really good, it was an awesome feeling winning," ended Rauliuk. "We're near the end of the golf season so it was great to end the season with a tournament win. I hit the ball pretty well throughout the round and I played with some great people, so it was a phenomenal day."

In the 11 & under age group, Ryder Newton represented the Jewel of the Parkland perfectly as he won his age group while another Roblin native took home the 15-17-years-old age group. Aidan Brook who will be at Kings main camp this weekend won that age group.