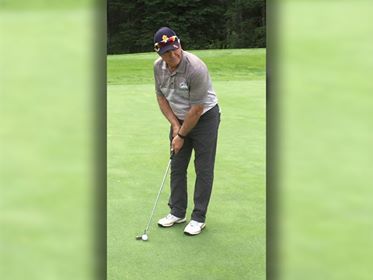 Keith Fawcett's summers consist of golf, golf, and even more golf. The Onanole native calls the Clear Lake Golf Course his home and he plays on the track nearly seven days per week. His best round of the season was a 70 which is also his age.

Earlier this week he made his way to the Carman Golf and Country Club to play in the Manitoba senior championships, an event that he plays in every season.

Fawcett would open with an 81 as he sat 11 strokes behind the first-round leader, Mike Walker.

"I wasn't playing very well when I left Clear Lake so I guess I wasn't expecting a whole lot," said Fawcett. "My goal; however, was to open the tournament with a better score than that. They had the pins in some very tough places, I hit the ball, okay but I was on the wrong side of the holes and it was pretty impossible to make putts."

Fawcett would improve in his final two rounds, score-wise. He shot a 78 in round two followed with an 81 in his final round. The Onanole native ended up finishing in a tie for 25th in the province.

"I hit the ball better as the day went on. Round 3 was a tough start, they had the pin on the right side and I hit it on the left side so I had like an 80 footer and I four-putt that one," added Fawcett. "It was a tough start, but I mean I'm pretty happy with how I did."

Bruce North who calls Carman his home won the title with a 7 over, Keith was 31 over.

Next up for Fawcett is the chance to defend a title that he's won the past two years at his home course. The Tamarack Tournament starts on August 15 and Keith will once again play in the Champion Men's age group and he's won it two straight years. His goal, of course, is to win the title for a third straight year but he knows that won't be easy.

"A lot of guys came from the men's event to be in the champion seniors and I know there are some really good players," ended Fawcett. "The field will be extremely tough and I'll have to be dialed in if I want to have a chance at winning this thing."