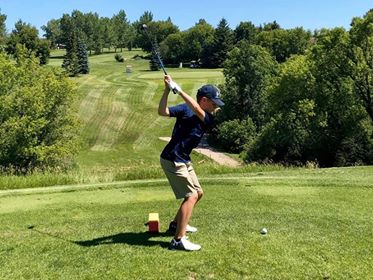 Junior golfers from Dauphin have dominated the Westman Junior Tour in the past and that was once again the case at the Wheat City Golf Course in Brandon yesterday.

As the many golfers from the City of Sunshine look forward to playing every Tuesday in a tournament format, they hone their skills basically every other day of the week at the number of wonderful courses the Parkland has to offer.

Hayden Shtykalo is one of those and it's already paid off for him as he won an event at the Glen Lea Golf Course earlier this season over Carson Craig by two strokes. He also won at Pleasant Valley last week. As the Tour continued its circuit across Westman, Shtykalo has once again joined the winner's circle as he continues to improve day by day.

An 85 yesterday earned him a three-stroke victory in the 12 & under age group as he won his third tournament of the season. Hayden has only played in six events and he's converted by winning a title in three of them.

"It feels pretty good. As I've said in the past, I just have to continue practicing and improving," said Shtykalo. "It's also wonderful that so many juniors in this area play in these events."

Hayden's three-win summer now has him right in the thick of things when it comes to the standings. He's earned 38 points and that's tied with Carson for the top spot in the season-long race to finish on top.

There is just two events left with next week being in Neepawa followed by the next weekend at Oak Island. That means 20 total points are up for grabs as Hayden and Carson go head-to-head.

"I definitely want to place first, but I know it's going to be tough," ended Shtykalo. "I'm going to have to continue playing solid and we'll see how things go. It should be a pretty interesting last two weeks here."

The title says it all. Jackson Delaurier has been a man on a tear this summer and that continued at Wheat City. Jackson tied Luke Myhre at Glen Lea earlier this summer as both players earned nine points.

Yesterday at Wheat City, Delaurier shot a 77 to once again win the 14 & under age group by eight strokes as Myhre placed second again. Boston Karlson came in at third. Add it all up and Jackson has won five titles this season and he finished in a tie for first in his other event.

Delaurier leads the group by seven points over Myhre who is in chase mode. Just as is the case for the 12 & under age group, two more events will be played in Neepawa and Oak Island on August 4 and August 11, respectively.