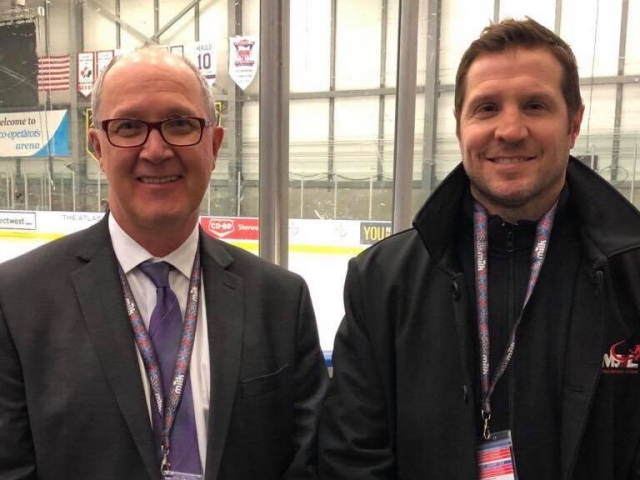 There is now a new man at the head of the Manitoba Junior Hockey League. After nearly two decades as Commissioner, Kim Davis is officially stepping down and with that, Kevin Saurette will take over.

Saurette, from Brandon, has been in hockey for his entire life, one that included a successful junior career which led to a professional career. Dating back to the 1997-1998 season with the Regina Pats, Kevin scored seven times in 65 times. A few seasons later, the Brandonite ended his junior career with the Kindersley Klippers of the Saskatchewan Junior Hockey League.

Led by Tyler Shantz who had 111 points that season, Saurette finished tied for fourth in league scoring with his 37 goals and 50 assists. After a 42-17-3 season, the Klippers were upset in the quarter-finals. The tough series loss officially closed the chapter on Saurette's junior hockey days and with that, a new chapter opened.

He played five full seasons with the University of Manitoba Bisons where he recorded at least 22 points in every season. In the 2005-2006 season, his final with the team, Kevin had 59 points and 113 penalty minutes. The native of Brandon also made his debut in the East Coast Hockey League that season where he recorded his first professional goal.

While with the Reading Royals in the 2006-2007 season, Saurette got the call-up, and with it, he was just one step away from making the National Hockey League. He joined the Binghamton Senators and scored two goals while adding two helpers in 24 games.

After two professional seasons in North America, Saurette who is now a father to two kids, moved to Germany to join the ESV Kaufbeuren Club who plays in the German3 league. He scored 42 times and had 56 helpers as he was just two points short of 100. He did; however, have seven more playoff points which gave him a total of 105 for the season. The all-star season saw Saurette move up to the German2 league where he would play the next four seasons, the first two of which were with Eispiraten Crimmitschau.

"Scoring my first goal as an American Hockey League player was extremely special," said Saurette. "Playing at a level that was just one lower than the National Hockey League, that's such a great feat. There were some ups and downs during my career, but I wouldn't change anything if I went back, it was a great nearly 20 years.

Before Saurette even left Belfast; however, he was looking for a new job. He knew he wanted to stay in the game of hockey in some capacity. After being shortlisted for a couple of jobs with Hockey Canada, the man from Brandon as still on the lookout and that's when the MJHL came calling. The league posted a job to become the Director of Hockey Operations and being a Manitoban, it was a perfect fit.

"Being a Manitoba product and growing up through the hockey system in this province, I just thought it would be good for not only me but my whole family as well," added Saurette. "I was just lucky enough that the Board of Governors alongside Kim Davis thought I was a good fit."

Saurette has now been the Director of Hockey Operations for the past for seasons and as mentioned above, he's about to become Commissioner. He will officially take over for Davis tomorrow on Canada Day.

"I'm really excited about this opportunity, but with that said, it's a little bit bitter-sweet," added Saurette. "I've really enjoyed working with Kim day in and day out over the past four years; I can't thank him enough for all he's done for me. I got to learn first-hand what a commissioner goes through on a daily basis and that was critical for me."

As we flashback, the MJHL cancelled its season back in mid-March, in the middle of the first round of the Turnbull Cup playoffs. The Canadian Junior Hockey League shortly after cancelled all play for the remainder of the season, including the Centennial Cup which was set to be held in Portage back in May.

At this point, Saurette says the league has every plan to begin its 2020-2021 season on time as scheduled in late September with training camps opening up earlier in the month. He does; however, say times are certainly different and everyone is learning to adapt.

"The biggest thing is navigating the uncertainty that comes with COVID-19," added Saurette. "We've done such an incredible job in Manitoba of trying to flatten the curve. We're definitely in a lot better place than many places in North America and we're grateful for that. We're planning on returning to hockey in September and we'll follow all the necessary public health guidelines to assure we can return safely."

There are two for sure things. Kevin will be the league's commissioner going forward and he assures everyone that when the MJHL can return, it will do so as a very elite league, one that has become one of the best in Canada.

"I've talked to a lot of scouts from all different levels and they all love the direction that the league has taken," concluded Saurette. "They've all taken notice of all the great talent in this league. If you look at our alumni, so many are moving on to play the next level whether it be collegiately or professionally."

We'll also have more information from the league's AGM as it becomes available.