Anyone who runs in a marathon knows how much hard work it takes to prepare to run it. Whether it is a half marathon or the full marathon, it certainly doesn't come easy and it takes months and months of preparation.

When it comes to the Boston Marathon, just getting the chance to run in the biggest marathon in the world is something most runners’ dream of. Sometimes dreams don't end up coming true; however, for a former native of Grandview, those dreams have come true not once, not twice, but three times.

Lori Shoemaker who grew up in Grandview and moved away for school when she was 17-years-old, has run in three Boston Marathons and one Los Angeles Marathon. Running in the Boston Marathon was always on Lori's bucket list, but she never knew if she would get that opportunity.

For the former Grandview native who now lives just south of San Francisco, Lori began her extensive training in November of 2008. The training was based on a program that would prepare her to run in the 26.2-mile marathon which attracts more than 900,000 spectators each year.

For the next five or so months, Lori would ramp up her training each week. Some days she would run six miles, some days it would be three. The most she can recollect running before the big day was 23 miles.

Then on April 20, 2009, Shoemaker, cousin of Carla Wolfenden who is a co-owner of Steiner Plumbing & Heating in Dauphin, checked running in the Boston Marathon off her bucket list. She finished the 26.2-mile trek in just more than four hours.

"I can't even describe how incredible it was, it was such an amazing run," said Shoemaker. "Everyone in the community from start to finish is out; it's just like wall-to-wall people. There isn't any space for anyone for the entire 26.2-miles. It was truly amazing."

She remembers the race really being split up into two parts. There is the first 20-miles and then the last 6.2. By the time when she had only 6.2-miles left, Lori remembers the struggle and truly how much of a grind it was to finish.

Lori never expected to run another marathon again after she took part in Boston; however, that wasn't the case. In fact, she ran three marathons in three years. After 2009, she took part in the 2012 Los Angeles Marathon before she returned to Boston.

The 2013 Boston Marathon started like any other marathon; however, the finish was anything but normal. During the event on April 15, two homemade pressure-cooker bombs detonated 14 seconds and 210 yards apart at 2:49 p.m., near the finish line of the race.

Three spectators died from the blast, the youngest of which was an 8-year-old boy. Sixteen people also lost legs; the youngest was a 7-year-old girl. Lori remembers being about two kilometres away from the finish line when the bombs detonated. She was running for the Boston Public Gardens that year and one of her team members was severely injured by the bomb and ended up spending many months in hospital.

"That was pretty emotional, there's no doubt about that," said Shoemaker. "You never think something like that would happen at such a big event and a safe one. Everyone is always just so happy to be there and when that happens, it's unbelievable."

In her own words, Lori says she had to come back for the 2014 Boston Marathon because of what happened the previous year and that's exactly what she did. This time, Lori finished the 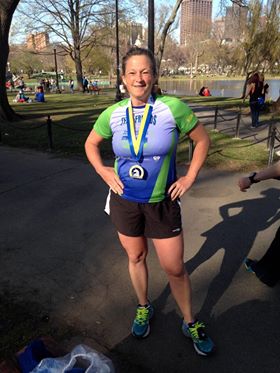 marathon in just less than five hours and this race would bring the end to Lori's marathon career.

Although it was an emotional day coming back after what happened in the year prior, for the former Grandview native, it had to happen.

"It was very important that we went back. The team member that was hurt wasn't able to run yet," continued Shoemaker. "It was emotional because you realize how many people were affected by the year prior, and not only physically, but mentally as well."

"I know a lot of people didn't come back; however, we had to," she added. "The support of the community was amazing; it was truly incredible how they rallied behind all of us after 2013."

A career at a glance:

Lori had a goal of running in just one marathon. Instead, she ran in four from 2009-2014, three of which were in Boston. Although her marathon running days are indeed over, Lori will never forget about the experiences she had.

"Boston is a really special place to run a race like that," continued Shoemaker. "The enthusiasm and the creativity of people is always amazing. Even for the people that aren't running, they make it their own day."

Lori was getting excited to watch the 2020 Boston Marathon which was originally set to take place back on April 20. However, it was postponed to September 14 because of concerns over the coronavirus pandemic.

Now, there won't be a Boston Marathon in 2020. For the first time in the race's 124-year history, it has been cancelled. The cancellation will affect the more than 31,000 registered runners.

Not even the Great Depression or ferocious storms had stopped the marathon in the past. The marathon pumps $211 million per year into the city's economy -- not counting the millions more that runners raise for charities.

Although Shoemaker wasn't set to run in the 2020 event, she's still sympathetic for all that it does affect.

"For so many people, it would have been their first time to ever run and take part in this, it's really sad that it's not going to take place," concluded Shoemaker.