Cam Ziprick was only 12-years-old when he found his passion and that passion is training horses to become champions on the track and his passion has led directly to that.

When he was 12, Cam had a friend whose dad trained horses in Saskatoon, and Ziprick spent a week there. From the first day that he went to the track, Ziprick was hooked and so many years later, he still is. In the end, a week wasn't enough for Cam; however. He wanted to go back and eventually, he went back to Saskatoon and he ended up spending the summer there.

Cam mentions he was bit by the bug and the rest is history.

"I find myself very lucky to have had found my passion so early in life," said Ziprick. "Being from a small town and going to the big city, it was incredible. I was so addicted to horse racing and the environment. That first experience was one that I'll never forget, that's for sure."

The road has included many different awards and first-place finishes, one of which was early this week. We'll chat about that in a little bit. First; however, we'll go back to early last year when a horse that Cam bred made history.

Escape Clause, a mare that was bred by the Russell native won a $100,000 race called the "La Canada" at Santa Anita Park in southern California. With the win, Escape Clause became the first-ever Manitoban-bred mare to win the race in Santa Anita history. In three other races prior to that one, Escape Clause finished 1st, 3rd, and 4th.

"That's pretty cool, it's like setting a record," said Ziprick when he remembers back. "She's our horse, we're down as her registered breeders and no one can take that away from us. It's very special to know she was the first Manitoban born horse to win that race."

That was in January of 2019. Now, we look forward to May 25, 2020 and another horse that was bred by Cam made history. Assiniboia Downs became the first track in Canada to host live racing in 2020. All of the races were run without fans in the stands, something that is completely different than what horse racing fans have become accustomed to. 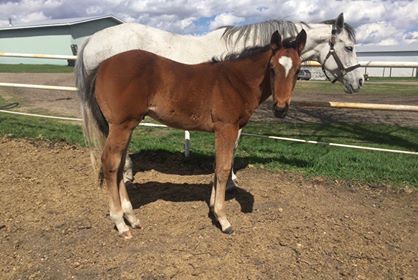 Bear Me A Moment is trained by Mike Nault, owned by Barry Arnason, the jockey is Rigo Sarmiento, and as mentioned above, Cam is the breeder. The horse ended up winning the first race in Canada without fans as Cam was once again a part of history.

"It was a pretty unique situation because no fans were allowed in the stands so we were just watching on our iPad," continued Ziprick. "It's always great when a horse that I bred ends up joining the winner's circle, it's a special moment."

Ziprick says he has bred about 40 or 50 horses that currently are at Assiniboia Downs and will hit the track in race action throughout the summer. After starting the season with a win in race number one, this summer could be one full of wins and great times.

"The list continues to get bigger and as long as they keep running, we're going to have a lot of fun," concluded Ziprick.