Swan River's Cockburn Lights It Up 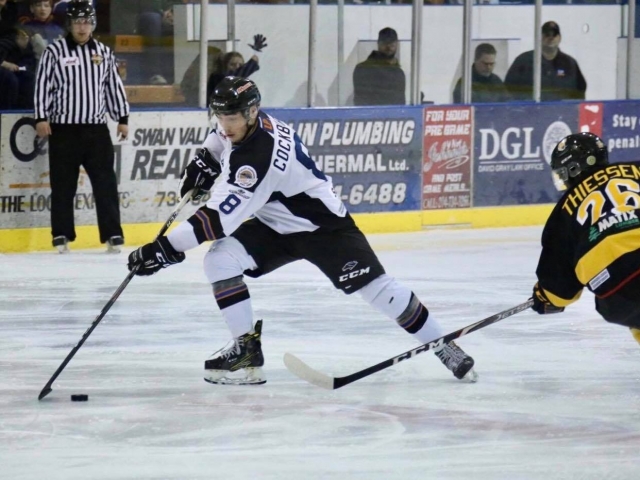 Late last week, the Canadian Junior Hockey League announced all of its member leagues across Canada were suspending their season, including the Manitoba Junior Hockey League. Shortly after, it was announced that the rest of the regular season and playoffs and Centennial Cup were being cancelled.

Prior to the suspension and eventual cancellation, seven teams were still alive in the MJHL as the chase to the Turnbull Cup continued. One of those teams was the Swan Valley Stampeders who were up 2-1 in their first-round series against the Waywayseecappo Wolverines. The Stampeders finished in fourth place in the league standings which earned them home-ice advantage for at least the first round.

"I think we had a pretty good season, we did what we needed to do to get home-ice in the first round," said Carter Cockburn, who has lived his entire life in Swan River.

Home ice is certainly something that Swan Valley used to their advantage. They won the first game of the series, 5-0, at the Centennial Arena. After losing game two back in Waywayseecappo, the Stamps' went back to work and simply put, hammered the Wolverines. They hit the double-digit mark offensively as they won, 10-0. A big key to success on the night was the play of Cockburn who had a career night. For the first time in his junior career, the now 18-year-old scored four goals.

"That was really special. You don't go into the game thinking you're going to do that, but when it happened, it was pretty amazing," continued Cockburn. "Our team had a lot of success clearly in that game. I wouldn't have been able to do it without my teammates; they're a big reason why I did that."

"I definitely have a bigger role this year. Last year, I was watching a lot because we had an older team," continued Cockburn. "With that role, it brought more offence. Now that the season's over, I have to start preparing and getting ready for next season, I need to take the next step."

Being from Swan River, Carter grew up watching the Stampeders. It was always his dream to play for his hometown junior team. On August 3, 2018, Carter signed with the Stampeders and his childhood dream of playing with the team was that much closer.

"I remember being a little kid and always watching this team and loving every minute," concluded Cockburn. "To get this chance to play in front of my families and friends now, it's absolutely incredible and I cherish each moment."