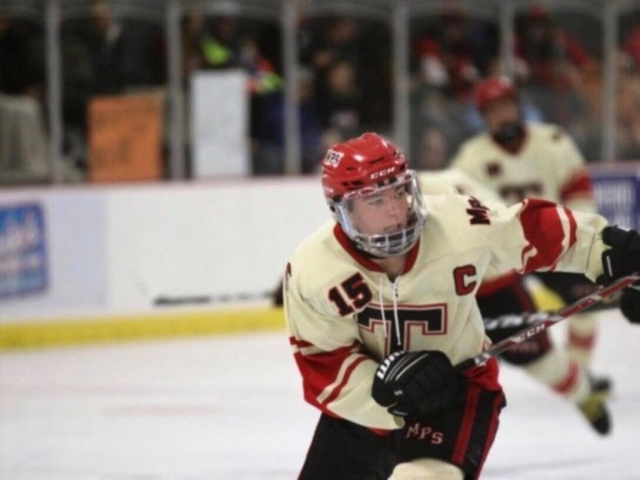 The Major Pratt Trojans hockey team has enjoyed a lot of success in the Westman High School Hockey League to date. They went 19-3-1 and they finished second place in the North Division, only behind their Parkland rival Dauphin Clippers.

When it came to producing goals, that came quite easy for the team as they scored 172 times over their 23 game regular season schedule. That was tied with Killarney for the most in the league.

A big piece of their success this season was their captain, Dawson Tweet. The grade 12 student had 26 points in 20 games prior to the postseason. With the playoffs now underway and a provincial qualifier in the past, Tweet has really stepped it up and taken his game to a new level.

In the past four games, Tweet has eight goals and nine assists. The production came in their two provincial qualifier games and their first two playoff games. Thanks to his success, the Russell native has been recognized by the Manitoba High School Athletic Association. He's this week's Rural Athlete of the Week.

"It feels pretty cool, it's definitely a huge honour," said Tweet. "I work hard all year and it's nice to get that recognition. I also owe a ton of the credit to my teammates and my coaches; I couldn't do it without them."

In the provincial qualifier, Major Pratt skated handily past their opponents. They first beat Birtle, 8-4 and they followed that up with a 4-0 win against Boissevain. With the two wins, the team is heading to the A/AA Provincial Championships that will be played in Rivers from March 12-14.

"We love going to provincials. For us to be able to qualify with those two big wins, it's going to be a ton of fun and I can't wait," continued Tweet.

"We have pretty high expectations. We have a good group of guys and we work hard always," he added. "I think we should do well at this."

When it comes to playing in the Westman High School League, their semi-final begins tonight and a tough task is ahead. They'll play the Killarney/Wawanesa Raiders who finished first in the entire league. Killarney also swept their first-round series against Swan Valley. Dawson had one assist in a 6-3 loss against Killarney back on January 31.

"They're number one for a reason, they're very strong and they've had a great season," added Tweet. "With that said, we feel we have very similar lineups. We're both deep and we both work hard, it should be a fun one."

Not only does Dawson succeed on the ice, but he does in the classroom as well. He maintains an 88% average.

"My parents always told me that I need to keep my grades up so I've always worked hard in the classroom," he concluded. "Keeping them up is also the key to pursuing post-secondary education and that's what I want to do."