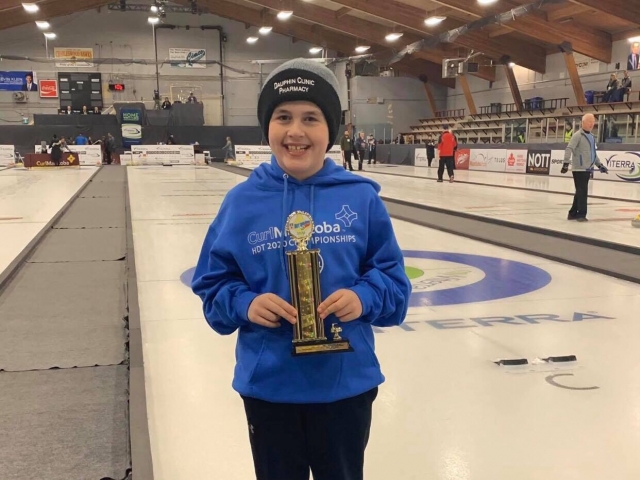 Jordan Height has only been curling for three years; however, he's already a Provincial Champion. The Dauphinite took part in the Hit, Draw, and Tap event this past weekend at the Viterra Championships inside the Eric Coy Arena in Winnipeg.

He earned his spot to the provincial event by winning the regionals last month which were played at the Dauphin Curling Club. Jordan was joined by nine others in the 9-10-year-old age group who all were battling for a title.

"It was a great experience, I'll definitely never forget about the whole thing," said Height.

That was Jordan's thoughts on just taking part in the event. When it got down to throwing rocks, Jordan stole the show. He had a nearly perfect score on his draw as he scored a four out of a possible five points. In the end, that was the score that gave Jordan his first provincial title.

"I was surprised that I won because I was competing against people from all over Manitoba," continued Height. "It feels so great, I'm still so happy. It's such an awesome feeling being a provincial champion."

Now a few days after the event, Height remembers his favourite moments about the event.

"I'll never forget about winning the title and standing by the trophy," continued Height.

"We're going out there to win it, but most importantly, we want to have a lot of fun," concluded Height.

Stay tuned for results from the bonspiel right here on 730CKDM.com.