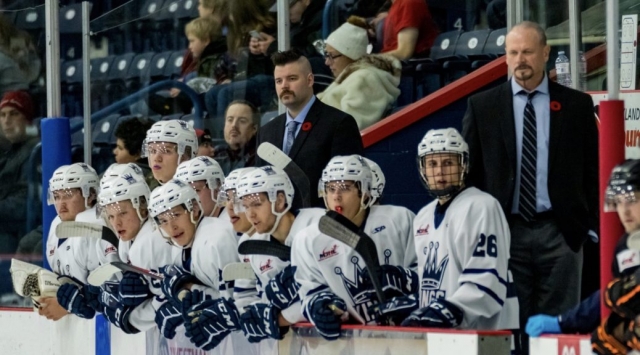 For the second time in a week, the Dauphin Kings used a big third period to earn a point. The club saw their point streak extend to nine games tonight inside of Credit Union Place. However, a point is all they would get in a 7-6 overtime loss at the hands of the Flyers, who now have 23 points on the season.

It was a great start to the game for Dauphin. On the power play, Grady Hobbs and Nakodan Greyeyes set up Cole DeKoninck who scored his seventh of the season to give Dauphin a 1-0 lead at the 7:19 mark.

At the 7:58 mark, Austin Lamotte was sprung on a breakaway and he beat Dorrin Luding to make it 2-0 for Dauphin.

The Flyers would then catch fire. They scored three straight in a nine-minute span to end the first period up 3-2.

Trailing 3-2, Nakodan Greyeyes scored his 10th goal of the season just 4:55 into the midway period. DeKoninck and Hobbs drew the assists. With the game now tied at three, the Flyers once again took over to end the period.

They scored three goals in seven makes to take a big 6-3 lead into the third period. But, Dauphin showed they know how to come back when down in the third. On Tuesday night they trailed by two goals in the final period against Waywayseecappo and they pushed the game into overtime.

Tonight, the team did the same thing with one of their best periods of the season. Grady Hobbs cut the deficit to 6-4 just 34 seconds into the period. Kadin Ilott would then make it 6-5 at the 10:11 mark and Mitchell Thiessen tied the game up just four minutes later.

Thiessen was making his Kings debut as an "AP" player. He plays for the Brandon AAA Wheat Kings.

Despite some late pressure, the Kings couldn't find the equalizer, but they did pick up a late penalty when Parker Fofonoff was sent to the box. On the ensuing power play in overtime, Jayden McCarthy scored his third goal of the game and eighth of the season to give the Flyers a 7-6 win and two points.

Dauphin continues their homestand tomorrow night when the Steinbach Pistons are in town.